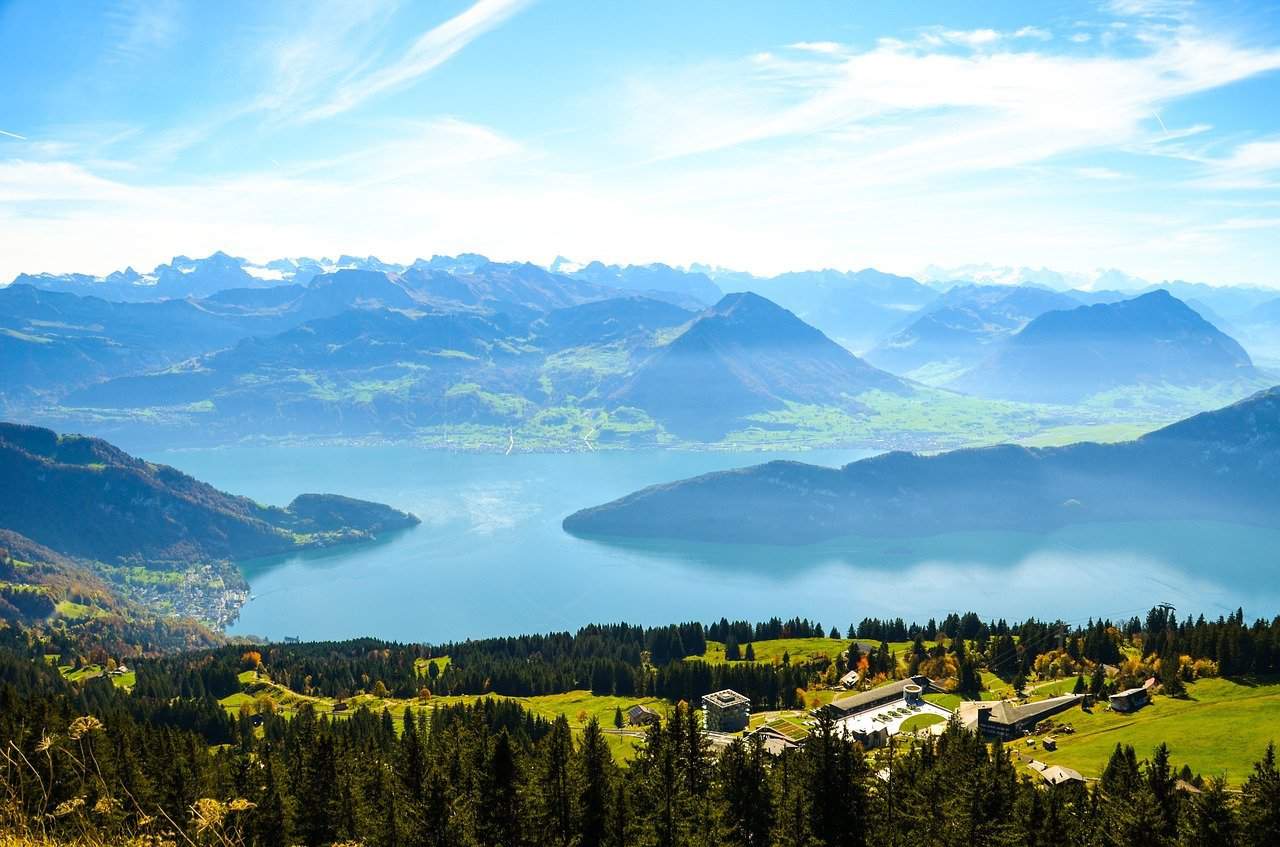 Lucerne is a charming city in the very heart of Switzerland. Surrounded by a fjord-like blue lake and mountains, visitors enjoy its beauty. For those who want to spend some time in Lucerne city, there are so many places you can visit: the Transport Museum (Verkehrshaus), the Lion Monument, the Rosengart Collection, and Chapel Bridge just to name a few. For those who want more details, we have an article about the best things to do in Lucerne: 9 Best Things To Do in Lucerne, Switzerland.

Right at the Bürgenstock Resort, one can hike on the rock path built between 1900 and 1905. There is a learning path on which twelve questions about geography and geology, history of tourism, technology, forest, and nature conservation are asked.

The Hammetschwand Lift in Bürgenstock Resort is the highest, free-standing outdoor lift in Europe. It is 152.8 meters high. Built back in 1905 by businessman Franz Josef Bucher, it was the first of its kind in the country. It was and is one of the most daring tourist facilities of the Belle Époque.

In less than a minute, you can go up to the observation terrace of Bürgenstock. This is the highest vantage point near the city of Lucerne and shows views of Lucerne, its lake, and the boats.

If you would like to buy your ferry and funicular tickets to Bürgenstock, you can do so via GetYourGuide – From Lucerne: Mount Bürgenstock by Ferry and Funicular.

Weggis is a relaxed, holiday resort southwest of Mount Rigi. It lies on Lake Lucerne and is roughly half an hour away from the center of Lucerne. It is a good starting point to spend some time in this sunny and warm resort before going up to Rigi. The relaxed feel of this town can be attributed to its mild climate, southern plants (chestnuts, palms, grapes, orchids), and the presence of a warm wind called föhn.

From Weggis, you can take the cable car direct to Rigi Kaltbad. The mountain Rigi provides awesome views of its surroundings: Lake Zug, Lake Lauerz, and Lake Lucerne. Rigi is admittedly one of the most visited mountains in the entire Central Switzerland region.

Rigi Kaltbad is also a popular destination due to its mineral bath (Mineralbad). The new bath was designed by famed architect Mario Botta whose works include the San Fransisco Museum of Modern Art, National Bank of Greece in Athens, and Santa Maria degli Angeli in Monte Tamaro.

Vitznau is, similar to Weggis, also a beautiful holiday resort near Lucerne. Parkhotel Vitznau, a 5-star hotel in this town, is an exceptional luxury hotel renovated completely in 2012 and 2013. It has its own beach, 2 restaurants, and a huge wellness area.

Vitznau is located on Lake Lucerne, also at the foot of Mount Rigi. It takes an hour with public transport to get from Lucerne proper to Vitznau. With a car, it takes only 30 minutes. From Vitznau, you can take the train going via Rigi Kaltbad to Rigi Kulm. Another possibility is also taking one of two small cable cars. One goes to Vitznauerstock and the other to Gersauerstock. From both mountains, you have the possibility to hike going to Rigi if that is what you wish.

Rigi is admittedly one of the most visited mountains in the entire Central Switzerland region. It lies surrounded by three lakes – Lake Lucerne, Lake Zug, and Lake Lauerz. Rigi is popular for its spectacular viewpoints overlooking the lakes and mountains.

Engelberg is the largest mountain village in Central Switzerland, located in canton Obwalden. The total travel time from Lucerne to Titlis is 80 minutes. Take the train from Lucerne to Engelberg village. From there, walk to the valley station of Titlis.

Engelberg has a famous Benedictine monastery where monks still continue to live, work, and teach. There is also a cheese factory, a museum, and a number of old chapels. From Engelberg, you can go up to the Titlis massif by cable car. Titlis has one of the highest peaks in the region at 3,238 meters (10,623 feet).

The rotating cable car Rotair brings visitors from Engelberg over the glacier to the Titlis peak. From the mountain station of Kleintitlis, you can see the glacier and rock ridges. Furthermore, it is only 219 meters from the mountain peak. This is a spectacular panorama point. Important: This is a high alpine area! The 40-minute tour can be dangerous. Beginners should not attempt this without proper equipment and know-how.

The ride from Trübsee to Kleintitlis at 3,020 meters is definitely exciting. The floor of the cabin turns during the 5-minute ride on its own axis. 80 guests can fit inside the cabin.

In summer, there are several activities available – hiking, biking, golf, and mountaineering. It is also popular for families with the summer toboggan run, an adventure playground and the Globi (a popular Swiss cartoon character) themed trail. In Winter, Titlis mountain is known for its diverse ski and free ride area.

If you would like to book a half-day Titlis guided tour from Lucerne, you can do so via GetYourGuide – From Lucerne: Titlis Half-Day Tour – Eternal Snow & Glacier.

Einsiedeln is a town popular not only among Catholics and pilgrims wanting to see the famous Benedictine Abbey and the Black Madonna but also among all other visitors wanting to view this 300-year-old baroque monument. The interiors are splendid and culturally meaningful. The abbey grounds also have a garden and a horse stable open to the public. Guided tours of the monastery organized by Einsiedeln Tourism are available daily (except Sundays and public holidays) and cost CHF 18 per adult.

The town of Einsiedeln itself is charming and filled with small shops, hotels, restaurants, and bakeries. Our favorite is Bäckerei Schefer. There is also a national ski jumping center with four hills located in Eschbach, Einsiedeln.

If you would like to read more about Einsiedeln, check out our article: Einsiedeln – The Most Famous Monastic Village in Switzerland.

Bremgarten is a charming little medieval old town along the banks of the Reuss river. It is listed as a heritage site of national significance. Bremgarten has a lot to offer, such as the town hall, the armory, the former prison, and the still existing city fortifications. It also has a church district called the “Little Vatican.” It is truly a picturesque town. It is not well-known but definitely worth visiting, especially if you are into history and picturesque, medieval towns.

Guided city tours can be booked for individuals (CHF 10.-) or groups of up to 25 persons (CHF 120.-) on the website of the Bremgarten Tourist Office. For kids, there is a large sprawling area in St. Josef Foundation with various farm animals as well as play areas.

Pilatus is a well-known excursion and viewpoint near Lucerne. From Lucerne, go to Kriens Pilatus-Bahnen valley station. It only takes 19 minutes one way. The train going up from Kriens, Lucerne to Pilatus Kulm takes an additional 41 minutes. There is no need to take a car if you are staying in Central Lucerne. The train connections are really good and quick.

Pilatus has the steepest cogwheel railway in the world. Conceived at the end of the 19th century, Eduard Locher envisioned a futuristic train. It was built with a maximum gradient of 48% and an average gradient of 35%. The train links Alpnachstad in Obwalden to Pilatus Kulm at 2,073 Meters.

The Golden Round Trip is also a popular choice for tourists. It combines a ride on the steamboat, the red cogwheel railway, and going down with the cable car. On the mountain station of Pilatus, there is a short, secure way to enjoy the panorama. It lies between the peaks Esel and Oberhaupt.

Zurich in Switzerland is a busy, bustling city with varied offerings – clean and green spaces, historical monuments, and a charming old town. Zurich even has a river, a lake, and an island. The activities are abundant.

From Lucerne, getting to Zurich is so easy by train. It takes 40 minutes and numerous train connections are available daily.

Here are some places for you to visit in Zurich: Grossmünster Church, Werdinsel (an Island), Polybahn ride, Hike to Uetliberg Mountain, Art Museum with Claude Monet, and Pablo Picasso, Bahnhofstrasse for shopping, National Museum, Fraumünster Church, and many more.

If you would like to read more about the things that you can do in Zurich, check out our article 25 Best Things To Do In Zurich, Switzerland.

Bern is the de facto capital of Switzerland. It is the federal city where the federal government holds office. It has a population of 144,000 and is the fifth most populous city in the country. The city of Bern itself has a beautiful old town that has been recognized as a UNESCO World Heritage Site. Places to visit in Bern are the following: Parliament Building, Cathedral of Bern, Bear Pit, Zentrum Paul Klee (Art Museum), Historical Museum, and Bundesplatz.

From Lucerne, getting to Bern is so easy with the train. It is a direct train connection from Lucerne and takes about an hour. It is definitely a good city to visit when you are staying in Lucerne.

If you would like to read more about spending a day in Bern, check out How to Spend 1 Day in Bern, Switzerland.

Solothurn is located in the northwest of Switzerland, on the banks of the River Aare. It is a beautiful, picturesque town that got its name (Salodurum) from the Roman era. It has a pedestrian-only old town that shows impressive baroque architecture. The town has eighteen structures listed as national heritage sites. Among those worth visiting in Solothurn are the Waldegg Castle and Solothurn Cathedral.

From Lucerne, getting to Solothurn is so easy with the train. It takes 1 hour and involves a quick change in train connection in Olten. Multiple trains to Olten from Lucerne are available daily.

If you would like to read more about Solothurn, check out our article: Solothurn – 9 Best Things to Do in this Beautiful Baroque City.