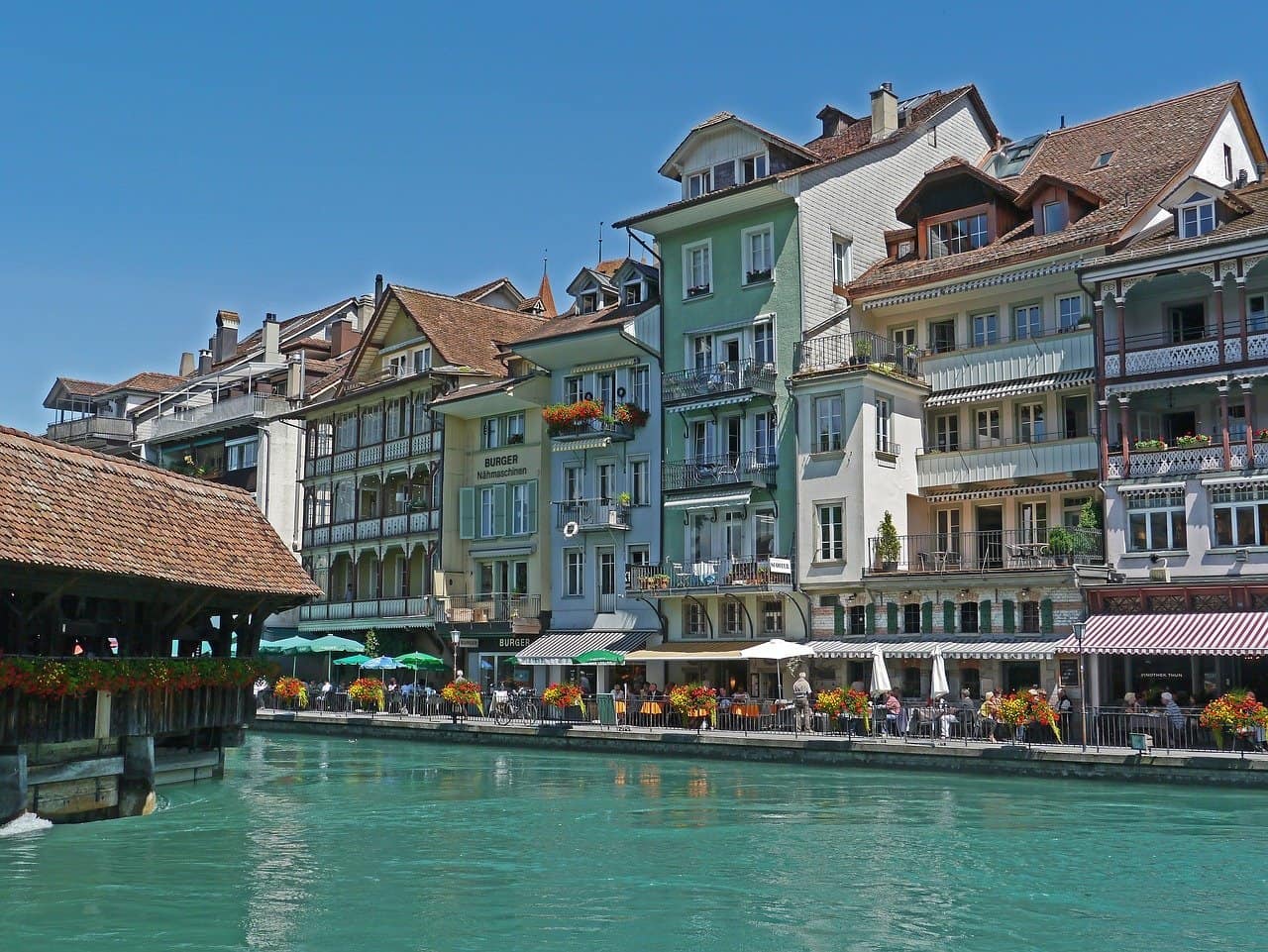 Bern is a beautiful city with a lot of things to do.  There’s something for everyone in Bern, whether you like animals, history, art, or just relaxing in a beautiful setting. The Old Town of Bern was designated a UNESCO World Heritage Site in 1983 because of its well-preserved medieval buildings. Many of these old buildings date back to the 12th and 15th centuries.

Still, you might want to check out some other pretty towns in Switzerland too. Check out this list of beautiful towns around Bern that are easy to get to. A lot of them are only an hour or two away.

Without further ado, here is a list of 10 beautiful towns near Bern.

In only less than 20 to 30 minutes from Bern, Thun offers a romantic and breathtaking setting. With stunning scenery and castles surrounding it, this town lies on the banks of Lake Thun and is surrounded by stunning scenery.

Thun is a great day trip from Bern if you want a more relaxing experience, like strolling through the old town and going to the castle. Lake cruises are also great in the summer.  And you can walk along the lakeside anytime.

If you would like to read more about Thun, you can check out 10 Best Things To Do In Thun, Bernese Oberland.

There are still city walls and defense towers in the medieval town of La Neuveville. Originally a part of Napoleonic France, it’s now part of the French-speaking Bernese Jura. About 3,500 people live in La Neuveville, which was founded in 1312.

Among La Neuveville’s highlights is its white church, or Blanche Église Réformée. There are Gothic frescoes and wooden ceilings in this church built back in 1345. Furthermore, a 14th-century tower lies at the end of the main street, Rue du Marché.

On top of the hills overlooking Lake Neuchâtel, the Château de Chenaux castle is a picturesque, medieval landmark. And it’s open to the public. Among the other places to visit in Estavayer-le-lac are the De Rivaz Chapel, Sacré-Coeur Chapel, the Collegiate church of Saint-Laurent, the fortifications, and more.

Visit this small but beautiful upcoming tourist spot near Bern; you’ll be glad you did.

Gruyères is one of Switzerland’s most beautiful towns, located in the canton of Fribourg. In addition to being known for cheese with the same name, it also has a castle and a well-preserved medieval center. I’d highly recommend the town as a day trip from Bern.

There’s Gruyères Castle, which is now also a museum.  You can also find the HR Giger Museum at St-Germain Castle. You should also check out the houses at Rue du Bourg 7, 39, and 47 and the barn at Grange du Laviau. Beyond the town, you can also drop by the Gruyères Cheese Factory, Moléson Mountain, or the reservoir Lake of Gruyère.

How do you get from Bern to Solothurn?  From Bern, take the train to Fribourg/Freiburg. In Fribourg, take the connecting bus to Bulle. In Bulle, take the next bus to Gruyères. The fastest connection from Bern to Gruyères takes 1 hour and 24 minutes. Gruyères is accessible from Bern in 49 minutes by car.

If you would like to learn more about Gruyères, check out our article Gruyères, Switzerland: A Romantic Little Town.

Solothurn is generally regarded as Switzerland’s most beautiful Baroque city. Solothurn is definitely worth the trip from Bern. Getting to Solothurn is easy, and it’s a pretty town. Combining French charm with German practicality, Solothurn is a fascinating small city. Aside from its impressive past, Solothurn offers a wide range of contemporary art and entertainment.

The town of Solothurn is also the capital of Solothurn canton. The city is situated along the Aare River and at the southern end of the Jura mountain range. It lies between Biel/Bienne and Olten, while Bern is just 43 kilometers away.

You can walk through the old town and see historical monuments, patrician houses, and strong fortifications. There are lots of small shops and restaurants here. The city is home to several cultural events that transcend regional significance, including the Solothurn Film and Literature Days.

If you want to discover some of Solothurn’s best attractions, then be prepared for an adventure. You can read more in this article: Solothurn – 9 Best Things to Do in this Beautiful Baroque City.

Murten, also known as Morat, is located on the shores of Lake Murten. You can take a quick trip from Bern to this pretty little town in canton Fribourg.

Among the Swiss heritage sites of national significance are Erli 2, Murten’s walls, the Grosshaus at Hauptgasse 43, the Rathaus or town council house, Löwenberg Castle, and the Old School House in Valvenach. There are also prehistoric pile-dwelling houses near Murten at Segelboothafen.

Murten is a pretty small town and you can wander around for an hour or two. You might enjoy a trip around the Three Lakes, sailing from Murten to Neuchâtel, then to Biel/Bienne, passing along the Canal de la Broye and the Canal de la Thielle.

You don’t want to miss the Murten Light Festival if it’s on. It usually happens toward the end of January.

If you would like to learn more about Murten, then check out our article Visiting Murten, Switzerland? Here’s What You Need To Know.

This hilltop town of Romont, first mentioned in 1177 as Rotundo Monte, has a lot of historic sites.  It is located in the canton of Fribourg. Bern is just a 40-minute train ride away from Romont.

The town itself is also included in the Inventory of Swiss Heritage Sites. It’s also in this area that you’ll find Romont Castle, which Peter II of Savoy probably used during the 13th century. The castle itself also has an elegant courtyard.

Besides the fortifications, there’s a collegiate church.

If you would like to learn more about some of Switzerland’s best medieval places like Romont, check out our article 10 Beautiful Medieval Towns in Switzerland.

Near the Doubs river lies Saint-Ursanne, a picturesque medieval town nestled between Porrentruy and Delémont. St. Ursanne was named after Saint Ursicinus, an Irish monk who lived in the 7th century. It takes about an hour to reach Saint-Ursanne from Bern.

Saint-Ursanne is located in the Jura canton, bordering France. You can step back in time as you explore this medieval little town with its cobblestone streets and charming houses. For example, there’s a beautiful bridge that leads to this historic old town.

The little town of fewer than 1,000 people has many historic buildings. Saint-Ursanne is also home to an abbey church, a church of the collegiate order, and a hermitage.

Lutry is between Lake Geneva and the Jorat region and quite close to visit from Lausanne. Lutry is in the district of Lavaux-Oron in the canton of Vaud in Switzerland. Besides producing wine, the town also has beautiful architecture and historical sites.

If you would like to read more about the different wine regions in Switzerland, check out our article 7 Best Idyllic Swiss Wine Regions Explained.

Brig is a historic town in Upper Valais. Stockalper Palace, the most prominent building in this alpine town, dates back to 1658-1678. It was built by Kaspar Stockalper, a Brig silk merchant.

Besides Stockalper Palace, Gamsenmauer and Church of Mariä Himmelfahrt with ossuary are historical sites. A stroll through the old town of Brig will bring you to stately houses, cozy hotels, and shopping spots. 20 kilometers away lies the Simplon Pass, one of the most beautiful alpine passes in Switzerland. Brig is also on the route of the Glacier Express that goes from Zermatt to St. Moritz.

How do you get from Bern to Brig?  From Bern, take the direct train to Brig. The fastest train connection from Bern to Brig takes 1 hour and 4 minutes. Brig is accessible from Bern in 2 hours and 12 minutes by car.

The list above includes some beautiful towns that you can visit from Bern. Here’s hoping you find one, two, or more that you’ll like. We have covered some of the best towns to see near Bern, Switzerland. The list above is by no means exhaustive. If you would like to visit a city near Bern instead of a town, you can visit either Burgdorf or Lucerne.