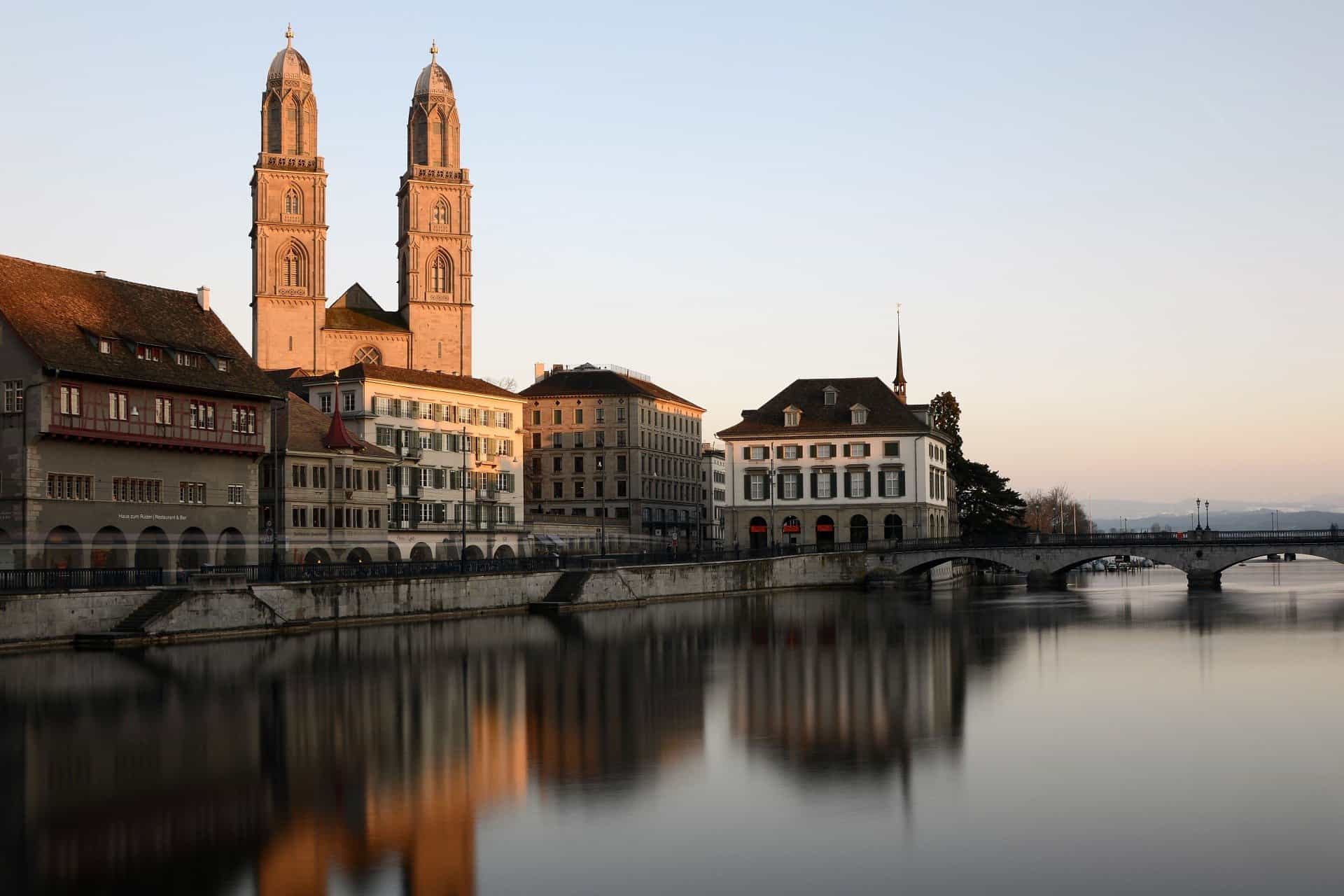 Zurich is the largest city in Switzerland. It is Switzerland’s financial center. It has not only a beautiful old town but also the Limmat River and Lake Zurich. There are many reasons to visit Zurich. It has a myriad of coffee houses, museums, parks, gardens, and shops reachable on foot from the city center. You can ride a boat, a ship, a bus, a funicular, or a tram.

Without further ado, here are 14 popular attractions near the Zurich Train Station:

Grossmünster is only 950 meters or 12 minutes by foot from the train station.

The Grossmünster Church (Great Minister) is a beautiful church in a breathtaking location. It has slender and striking towers. The Romanesque-style Church is likely the most recognized landmark of Zurich. It is the cradle of the Zwingli Reformation.

When the priest Ulrich Zwingli took up his duties in 1519, the house had already been standing. The Church was built between 1100 and 1250. The end of the 15th century saw the towers added. During the reformation, the richly decorated interior was reduced to the essentials. Even today, the interior of the church is simple compared to its impressive exterior. There are also 3 windows by Augusto Giacometti from 1933 which show the Christmas Story.

The secret highlight of the Church is the Karlsturm – the right of the two towers. It requires 187 steps going up until you arrive at an incomparable view of the city, the lake, and the river.

Landesmuseum Zurich is directly in front of the train station. It is only 1 minute by foot.

Landesmuseum Zurich (Swiss National Museum) is the most-visited museum in all of Switzerland. It is located next to the Zurich Train Station (Zürich Hauptbahnhof). The museum has exhibitions dating from prehistoric times until the present.

Gustav Gull designed this palace-looking museum which opened in 1898. It is impressive with a total area of over 6,000 square meters.

Landesmuseum contains over 820,000 objects. It has the largest collection of all cultural history and handicrafts in the country. The permanent exhibitions cover prehistory and early history. The museum has weapons, art, jewelry, clothing, and everyday objects from various eras. It also has temporary exhibitions, sometimes with subjects appealing to children as well.

TIP: From Landesmuseum, there are boats in July and August which leave every 30 minutes the whole day. The boats cruise on the Limmat River. In May, June, and September, the boats cruise only during the afternoon. It is a beautiful ride with panorama windows.

Lindenhof is only 600 meters or 8 minutes by foot from the train station.

Lindenhof might be not as known as Grossmünster. But it is definitely something not to miss. From Lindenhof, you can view the old town, the Limmat river, the Grossmünster, and the town hall. It is 20 meters higher on top of a little hill. It has a calming, relaxing charm.

Lindenhof was also featured in the opening credits of the Korean show Crash Landing Into You.

UBS Polybahn is only 400 meters or 5 minutes by foot from the train station.

The Polybahn funicular brings visitors from Zurich-Central 176 Meters above to the city. The train has been running since January 1889. It brings its passengers to the 41-Meter higher terrace called Polyterrasse.

Interest in it waned over the years. It could have been bankrupt were it not for some groups who helped it survive. These include “Verein pro Polybahn” from the ETH University and the Schweizer Bankgesellschaft (now known as UBS). Nowadays, it is known as UBS Polybahn.

Polyterrasse is only 650 meters or 10 minutes by foot from the train station.

Polyterrasse has one of the nicest viewpoints in Zurich. To reach it, you can go with the Polybahn from Zurich Central. Another option is to take the tram until ETH/Universitätsspital.

From the Polyterrasse, you can see the roofs of the city and the alpine peaks far away. The Polyterrasse comes from the name of the previous name of the university near it, ETH. It used to be Eidgenössisches Polytechnikum in the past.

Gustav Gull expanded between 1915 and 1924 the building was started by Gottfried Semper. He added the Polyterrasse. Between 1965 and 1978, Charles-Edouard Geisendorf added a multi-purpose hall. Sports and recreational rooms were also added. The terrace was complete.

Schanzengraben is only 950 meters or 12 minutes by foot from the train station.

Zurich city converted a third of its military installations into a place to relax in 1984. The Schanzengraben feels like a parallel world. You are still in the bustling city. Go down a small staircase two meters below, and it’s peaceful and relaxing. It is in the middle of the city but feels peaceful.

It used to be smelly on the Limmat river due to industrialization. In the 1950s, discussions started about improving it. The citizens discussed building a pedestrian promenade along the small inner-city canal. Another 25 years passed before the project was actually tackled. In 1984, the new Schanzengraben finally opened.

Frauenmünster Church is only 900 meters or 11 minutes by foot from the train station.

Frauenmünster is the smallest of the 34 Evangelical Reformed churches in the city. Even so, it is very beautiful. The grandson of Charlemagne built this church back in 853. City regents used it originally as an office. Nowadays, the church stands with its basilica and cloister.

Frauenmünster also contains the works of world-famous Marc Chagall and Augusto Giacometti. The installation of the windows by Giacometti was done in September 1945. The delay was due to the Second World War. It is the last of Giacometti’s over 20 glass paintings. This masterpiece is 9 meters high and twice as large as Chagall’s Christ Window.

In 1970, Marc Chagall added the five-part choir windows of the church, as well as the rose window in the south transept.

Niederdorf is only 450 meters or 6 minutes by foot from the train station.

Niederdorf is the old town between Central and Grossmünster, Limmatquai, and Seilergraben. With cobblestones, quaint little shops, and restaurants, visitors and locals enjoy strolling here. It’s the popular promenade in Zurich a stone’s throw away from the train station.

Sechseläutenplatz is only 1.5 kilometers or 19 minutes by foot from the train station.

Sechseläutenplatz is between the Opera House and Bellevue. Each year, on a Monday in April, there is a parade in this area called Sechseläuten. Various guilds from Zurich and guests of honor present themselves on horseback. Then they come here to burn the Böögg. Depending on how long it took for the Böögg to explode, they can predict how warm summer will be.

Sechseläuten is the most aesthetically pleasing festival in Zurich. Each guild marches with a unique costume and wagon decoration. The parade route goes from Bahnhofstrasse until Limmatquai. The burning of the Böögg begins as soon as the guilds gather in the Sechseläutenplatz at 6:00 PM.

During the Advent season, it is transformed into a cute little Christmas market. This Christmas Village with cute little red houses has lots of restaurants and shops. Lots of shops sell handcrafted and gift items. There is also normally an ice skating rink and a carousel for children.

Uhrenmuseum Beyer is only 750 meters or 9 minutes by foot from the train station.

The Beyer Watch Museum is the oldest watch shop in one of the most expensive shopping streets in the world. They sell world-known watches: Rolex, Patek Philippe, Cartier, Breitling, IWC, and many more.

The Beyer family has been leading its business in Zurich since 1760. The museum shows 1,200 exhibits, 300 technical wonders, and supplementary temporary presentations. Timepieces shown range from antique shadow rods, sundials, to spectacular automatic clocks.

Kunsthaus Zurich is only 1.2 kilometers or 15 minutes by foot from the train station.

Kunsthaus Zurich is an art museum in Zurich. The museum has pieces from Pablo Picasso, Vincent van Gogh, Claude Monet, and Andy Warhol. Other renowned artists from different times and styles also have their works in it.

The museum is over 7,000 square meters large. It also displays the works of Swiss artist Alberto Giacometti.

Paradeplatz is 300 meters or 4 minutes by foot from the train station.

Urania is the right place for observing the sky above Zurich. You can also turn your fascination into scientific curiosity. In the middle of the city, opposite the Lindenhof, is the Urania-Sternwarte. It is the first Swiss observatory to offer a view of the universe.

Zeiss-Werke in the East German town of Jena built the telescope in 1908. It is in the 51-Meter-high tower. This allows the twelve-ton telescope possible to magnify the moon up to 600 times.

Not only is the view of the stars beautiful in Urania. You can also see the old town and Zurich city.

Bahnhofstrasse is directly in front of the train station on the other side of the Landesmuseum. It is only 1 minute by foot.

On this 1.4-kilometer-long street, we find luxury labels such as Louis Vuitton, Gucci, Cartier, Prada, Burberry, and more. We also have popular high street brands such as H&M and Mango. The shops range from jewelers, luxury watches, clothes, and more.

During the Christmas season, Bahnhofstrasse is also lined up with pretty night lights.

Paradeplatz is 900 meters or 11 minutes by foot from the train station.

Paradeplatz is the financial heart of Zurich in the middle of Bahnhofstrasse. It houses two of the biggest banks – UBS and Credit Suisse. Lots of smaller banks are also scattered nearby – Pictet, Julius Bär, Lombard Odier, and Safra Sarasin. It is one of the financial centers in the world.