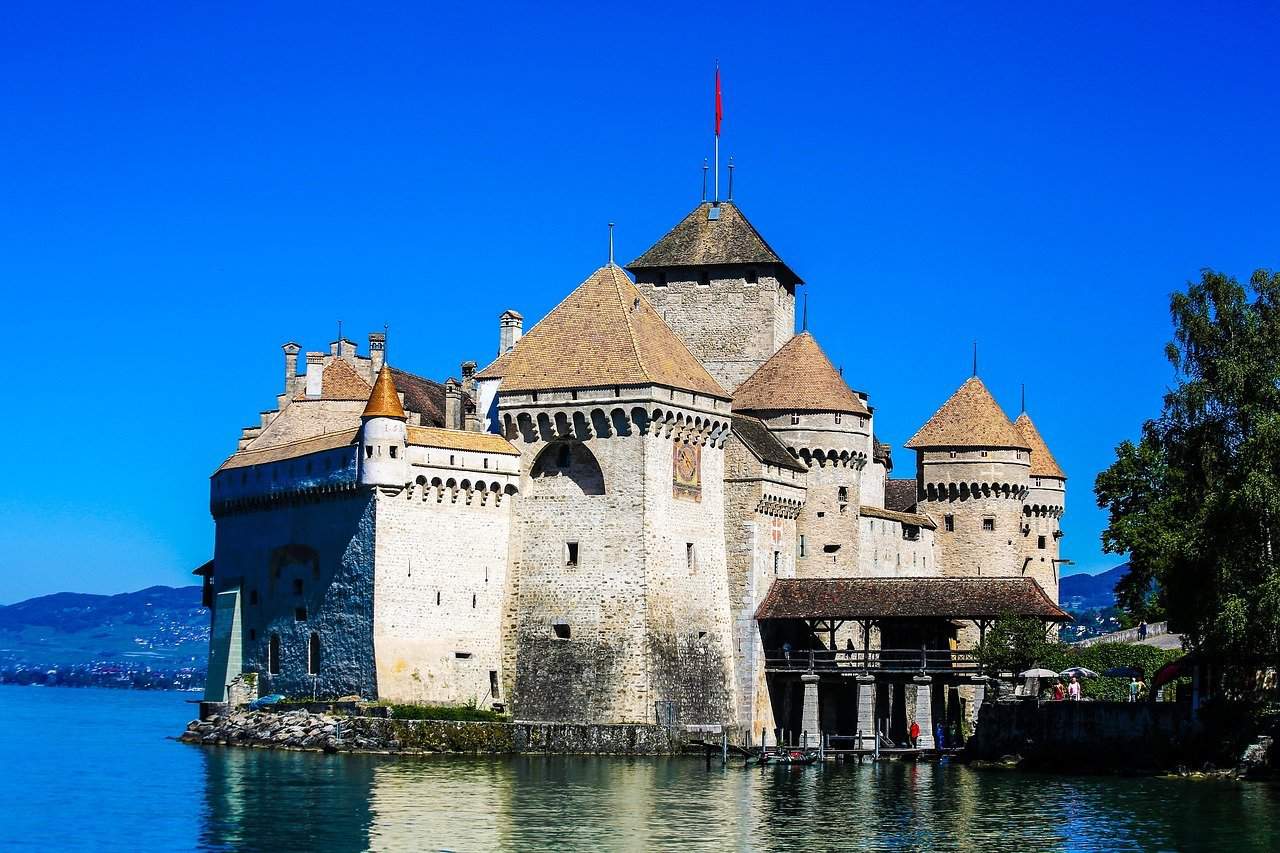 Vevey is a jewel situated on the northern shores of Lake Geneva. This picturesque town has a spectacular Alpine panorama, a mild climate, vineyards, numerous excursion destinations in the region, and a fleet of paddlewheel steamers on the lake. Stunning hotels and a promenade lined with palm trees and flowers welcome visitors.

While Vevey may have a lot of interesting places to visit such as the Alimentarium, Chaplin’s World, Musée Jenisch, and more, you might want to venture out of the town as well. In case you are based in Vevey and would like to see beautiful towns nearby, then this list is for you.

In this article, we will discuss 8 beautiful towns you can visit near Vevey, Switzerland.

Montreux is a pretty town in the canton of Vaud, Switzerland, northeast of Lake Geneva. Besides its spa facilities, Montreux is famous for its mild climate, awesome views, and the Montreux Jazz Festival. Eight kilometers run from Clarens, through Chillon Castle, and up to Villeneuve. Combined with Vevey-Montreux, it’s home to around 85,000 people.

For those wanting panoramic views, you can visit Rochers-de-Naye. A funicular will bring you up within an hour to heights of up to 2,000 meters. From Rochers-de-Naye, you get fantastic views of Lake Geneva and the surrounding Alps.

The Swiss town of Aigle is located in the canton of Vaud right within the Rhone Valley and close to Vevey and Lake Geneva. This beautiful town has a castle, vineyards, and beautiful scenery. Aigle is a great place to come if you’re looking for a beautiful, yet relaxing town near Vevey.

Explore the beauty of Aigle Castle, a Swiss gem. Château d’Aigle features a Vine and Wine Museum surrounded by vineyards. In the old days, it was home to prominent people like the Barons of Aigle and the Lords of Compa. These days, you can visit the wine museum at your leisure.

The Church of Saint-Maurice, De la Dîme House, as well as the entire town of Aigle are all listed under the Inventory of Swiss Heritage Sites.

The Swiss town of Lutry is in the district of Lavaux-Oron in the canton of Vaud.  Lutry is between the Jorat region and Lake Geneva and not too far from Vevey. In addition to producing wine, it has beautiful architecture and historical sites.

If you would like to read more about the different wine regions in Switzerland, check out our article 7 Best Idyllic Swiss Wine Regions Explained.

There’s a town called Morges on Lake Geneva, opposite Mont Blanc and not too far from Vevey. In the Middle Ages, it served as a seasonal Savoy court residence and bailiff’s seat.

Markets are twice a week on the pedestrianized Grand-Rue in the heart of the old town. It also has an impressive castle, Morges Castle, with multiple museums. They also have a big Tulip Festival in April and May.

Yverdon-les-Bains is a beautiful town about an hour from Vevey. Yverdon-les-Bains has a rich history that includes the Alemanni, the Romans, and the Savoys. It’s also known for its thermal springs, which have been used as mineral baths since the Roman era.

Castellans of the Savoy dynasty used to live in Yverdon-les-Bains Castle (Château d’Yverdon). This Swiss heritage site has four towers and is considered a national treasure.

On the banks of Lake Geneva, near the border with France, is a charming town with a relaxed vibe called Nyon. This lovely lakeside town is about 25 kilometers northeast of Geneva; it’s actually part of the bigger Geneva metro area. It’s about an hour away from Vevey.

The whole old town of Nyon is on the Swiss Heritage Inventory. A notable Swiss heritage site of national significance is Nyon Castle. Also worth checking out are the following: the Museum of the History of Porcelain, the Roman Colonia Iulia Equestris, the Roman Museum, and the Swiss Reformed Church of Notre Dame.

Nyon is also the headquarters of the Union of European Football Associations (UEFA) Headquarters.

This hilltop town of Romont, first mentioned in 1177 as Rotundo Monte, has a lot of historic sites.  It is located in the canton of Fribourg The pretty town of Romont is an hour from Vevey by train, and even less by car.

The town itself is also included in the Inventory of Swiss Heritage Sites. It’s also in this area that you’ll find Romont Castle, which Peter II of Savoy probably used during the 13th century. The castle itself also has an elegant courtyard.

The Stained Glass Museum of Switzerland is right at Romont Castle. It has medieval glass art and reverse glass art. Romont has the biggest collection of reverse glass paintings in the world. In addition to fortifications, there’s a collegiate church.

If you would like to learn more about some of Switzerland’s best medieval places like Romont, check out our article 10 Beautiful Medieval Towns in Switzerland.

On top of the hills overlooking Lake Neuchâtel, the Château de Chenaux castle is a picturesque, medieval landmark. And it’s open to the public. Among the other places to visit in Estavayer-le-lac are the De Rivaz Chapel, Sacré-Coeur Chapel, the Collegiate church of Saint-Laurent, the fortifications, and more.

You’ll be glad you stopped by this little but beautiful spot near Vevey.

We have covered some of the best towns to see near Vevey. The above list isn’t exhaustive and doesn’t even include bigger cities nearby worth visiting like Lausanne, Geneva, and Martigny.

There are a ton of beautiful towns around Vevey, as you can see. Hopefully, you found one you like on our list.