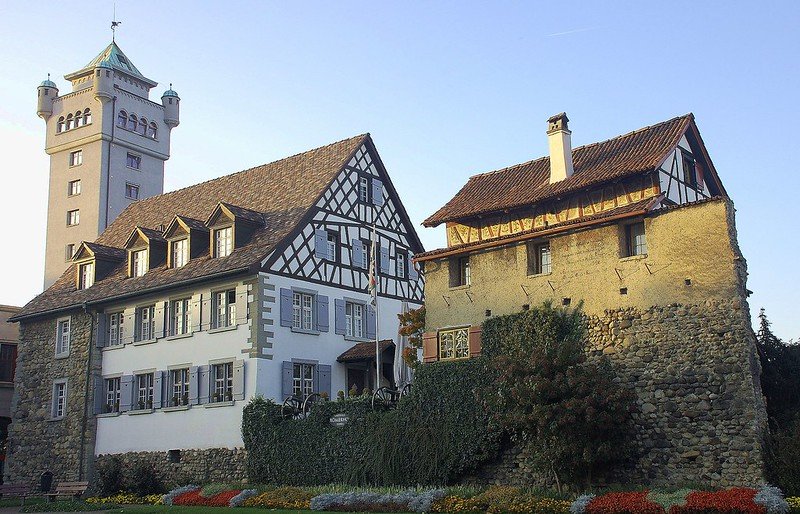 Though the country is landlocked, Switzerland is still a water castle right in the heart of Europe. There are plenty of lakes, rivers, and streams in the country. Several lakes in Switzerland are quite popular. One is also quite large and shared with Germany and Austria. This is Lake Constance (or Bodensee as it is called in German).

Hence, it comes as no surprise that Lake Constance attracts many tourists. You can do a lot of activities on and around the lake, including sailing, swimming, and many others. In addition, it is surrounded by gorgeous towns – some in our neighboring countries.

There are lots of beautiful towns to visit on Bodensee. Arbon, for example, is a charming historic port city with an old town, town hall, castle, and many more. In this article, we will be going through 6 beautiful Swiss towns that you can visit on Lake Constance (Bodensee in German).

Lake Constance (Bodensee) is a 63-kilometer-long lake shared by Germany, Austria, and Switzerland. Its total area is impressive – 540 square kilometers. It is the third-largest inland lake in Europe.

And each lake has its own tiny island – Reichenau, Lindau, and Mainau.

Which Swiss towns can we visit on Lake Constance?

Indeed, there are many holiday spots around the lake. So, now we ask, which Swiss towns can we visit on Lake Constance?

Arbon, Steckborn, Kreuzlingen, Romanshorn, Rohrschach, and Mannenbach are some examples of charming Swiss regions on Bodensee.

These regions have picturesque towns, informative museums, and relaxing views of the lake. Summer also brings good conditions for sailing, windsurfing, and swimming in the lake.

The view behind the lake consists of Appenzellerland with the 2,504 meters high Säntis. From the Swiss side, we see the German shore with various fruit crops and vineyards.

Along the shores of Lake Constance is the historic port city of Arbon in Thurgau. It is not only an excursion destination but also a holiday region. It also offers lots of possibilities for biking and hiking. With its three kilometers of lakeshore, it really offers everything under the sun regarding water sports.

Celts named it “Arbona” or “good earth” back in the days. Nowadays, we call it Arbon. The city used to produce lots of linen during its heyday.

While visiting Arbon, you can begin by strolling in its historic old town. You can also visit the following sites:

The historical museum in the Arbon castle gives an overview of the 5,500-year history of this town.

There are more historical buildings to visit aside from the list above. A more comprehensive list is available as a PDF from the Thurgau Bodensee tourist center.

Once you are done visiting the historic sites, you can also ride the Lake Constance ship, go to the swimming pools, visit the old-timer Saurer Museum, or cycle along the famous Arbon terrain overlooking Lake Constance.

If you would like to read more about Arbon, check out The Historic Town of Arbon, Switzerland.

Steckborn is a beautiful Swiss town on Lake Constance worth exploring. It is a municipality in Frauenfeld District in the canton of Thurgau. It is in the southwestern area of Untersee, Lake Constance.

Steckborn has a picturesque old town. Its distinctive landmark is the Turmhof Museum. Built back in 1282, the museum was once the seat of the abbots of Reichenau. In 1614, it underwent an expansion. It has also an integrated foyer that serves as a restaurant. Nowadays, it shows the culture and history of the Untersee area. The exhibitions include but are not limited to the following:

You can also visit the baroque church or participate in sewing courses in Bernina.

Kreuzlingen is in the Swiss-German border. Its origins in 1928 come from integrating three villages. Nowadays, it is a business and residential community. Tourism is only secondary here, unlike in Arbon. Yet, it still has a medieval town center. It also has a beautiful castle restaurant called Seeburg.

The Seeburg Castle was once the summer residence of the Augustinian Abbey. Built back in the 16th century, the castle was rebuilt in 1870. Today, this castle is a stylish restaurant available for weddings or family gatherings.

You can also visit the following sites in Kreuzlingen:

Romanshorn has the biggest shore on Lake Constance in Switzerland. It has a beautiful lake park called Seepark where you could relax. Take wonderful sunset pictures nearby. In this city, there are trains, ships, ferries, and bikes in all directions. In fact, the ferry Romanshorn-Friedrichshafen allows cars to be ferried from Switzerland to Germany and back.

Right next to the Seepark is a castle-turned-hotel called Hotel Schloss Romanshorn. Nearby is also has a small museum called Museum am Hafen.

Romanshorn has a long promenade and well-kept facilities. In summer, they also have a good swimming area (Freibad Romanshorn) with 3 pools, a slide, a whirlpool, a current basin, and a diving platform. It is one of the most attractive bathing places in Eastern Switzerland.

Freibad Romanshorn is open in summer from May to September starting 9:00 AM. The Address is Badstrasse 50, 8590 Romanshorn.

For fans of cars, there is also a museum called Autobau Erlebniswelt Romanshorn. The ex-racer Fredy Lienhard built it in Romanshorn. It features over 80 cars and a professional racing simulator. It is a cool place to visit for car fans. Brands include Ferrari and more.

Rohrschach was an important port and marketplace for St. Gallen from an early age. They have traded grains and wines, as well as elaborate embroidery. At the harbor is the Kornhaus – considered the most beautiful granary in Switzerland. Now it is a local museum called Museum in Kornhaus.

Did you know that Rohrschach also has many beautiful painted houses? These houses are from the 17th and 18th centuries complete with bay windows. There is also a baroque church St. Kolumban and Konstantius. Above the town lies the monastery Mariaberg built between 1484 and 1519. Actually, it was never used as a monastery. In fact, it is now part of the local University of St. Gallen.

Directly across Rohrschach is the German island Lindau. Nearby in Altenrhein is also the Fliegermuseum Althenrhein. This museum contains airplanes such as the Hawker Hunter, Boeing Stearman and many more. It also has fighter planes from the Swiss Air Force.

“The most beautiful castle on Lake Constance” is the term used for Schloss Arenenberg. In Mannenbach/Salenstein, above the lake, is the popular Napoleon Museum.

The castle Arenenberg was called Narenberg or Narrenberg in the past. In 1817, the ex-queen Hortense bought it. She was the stepdaughter of Emperor Napoléon I. Hortense lived in Thurgau with her sons. Her youngest son, Charles Louis Napoléon Bonaparte, later became the last French Emperor. He spent most of his youth in Arenenberg Castle. Charles Louis’ wife Eugénie also spent time in Arenenberg.

In 1906, Empress Eugénie gifted Canton Thurgau the castle. It is now known as the Napoleon Museum. In it, we can see various furnishings and furniture from different eras. The castle also has an adjacent park with many art objects. You can move freely in the castle and park.