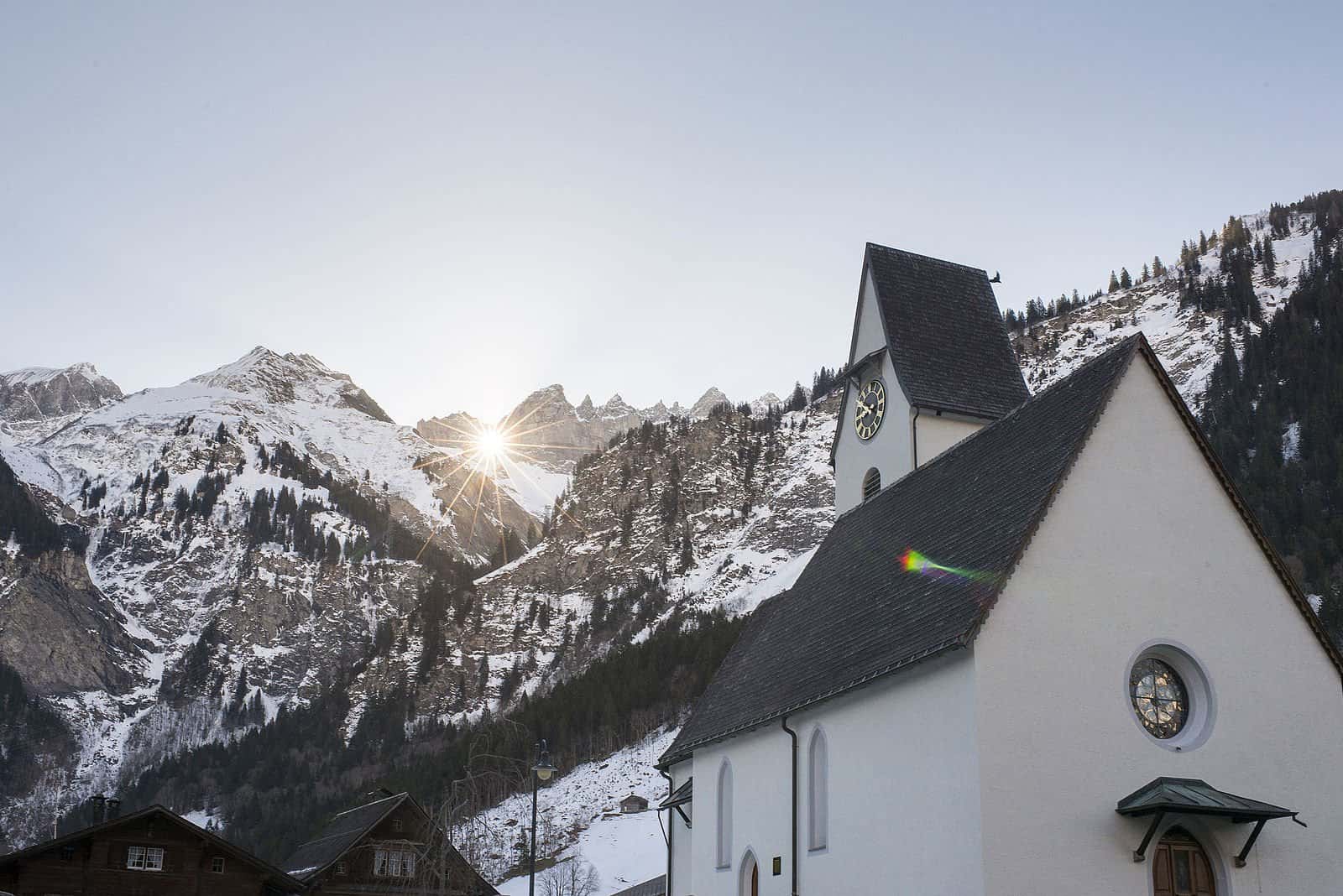 Likely the most awesome thing to do in Elm, Glarus, in Switzerland happens only four times a year – twice in spring and twice in autumn. Astronomers and non-astronomers alike flock to the Elm Church to witness the Sun Window on Martin’s Hole.

Elm is a holiday resort in the canton of Glarus in Switzerland. They have perfect slopes in winter and many hiking trails in summer. It is in Sernf valley together with the other villages – Matt and Engi. To its south lies the Flims, Laax, and Falera region of the canton of Grisons (Graubünden).

Elm is such a special place to visit because it lies in UNESCO World’s Heritage Sardona Tectonic Arena.

It is also the hometown of the most successful female Swiss skier in history, Vreni Schneider. And the home of the well-known fizzy citrus drinks Elmer Citro.

Here are some things you can do in and around Elm, Glarus in Switzerland:

Best Things To Do in Elm, Switzerland

Martin’s Hole is one of the most well-known geological treasures of Elm. It is a 17-meter high and 19-meter wide geological window, 2,600 meters above sea level in Tschingelhorn. In fact, it is part of the UNESCO World’s Heritage Sardona Tectonic Arena.

Four days a year – on the 13th and 14th of March (8:53 AM) and 30th and 1st of October (9:33 AM), the sun shines through Martin’s Hole. The sunlight comes shortly before it rises, directly through the Church of Elm, Glarus, in Switzerland.

2. Find the “Magic Line” at This UNESCO World Heritage Site

The Tectonic Arena Sardona is composed of upside-down mountains! What does that mean? It means that the older rocks are on top of the younger rocks. The older rocks are 250 to 300 million years old. The younger rocks are only 35 to 50 million years old. This happened below the earth’s surface millions of years ago. Nowhere else in the world can you find this phenomenon. The diversity of plants, animals, stones, and landforms in this region is one of a kind.

You can, of course, also hike towards Tschingelhörner for a closer look. It is easy to observe this phenomenon on Foostock between Elm and Calfeisen Valley.

3. Visit the Children’s Paradise in Ämpächli

Beside the Mountain Restaurant Ämpächli are numerous activities interesting to children and adults alike. It is located just directly beside the mountain station Ämpächli. Furthermore, it serves as a starting point for the Riesenwald hike – a stroller-friendly hike for children.

On the playground, they have:

Mountain carts and monster rollers are available for rent in the Ämpächli Mountain Station. The ride from Ämpächli down to Elm valley is approximately 4 kilometers long. Renting both includes the use of a helmet.

Mountain carts are three-wheeled Go-karts (or carts), popularly used to ride the mountain downhill. It is recommended starting 12 years old. Prices start at CHF 15 per adult and CHF 10 per child.

Monster rollers look like scooters with huge wheels. I have seen parents take one small child with them. Kids can ride it starting at 9 years of age. Prices start at CHF 10 per adult and CHF 6 per child.

5. Hike One of Elm’s Beautiful Trails

There are lots of hiking trails in and around Elm. There are hikes with varying levels of difficulty, hikes that go over mountain passes, and nordic walking. Elm’s website has a great overview of their hikes (click here). I will include the four most popular hikes below.

This easy high-altitude trail Obererbs to Ämpächli starts in Obererbs at 1,702 meters above sea level. It is an easy trail through the Freiberg Kärpf – Europe’s oldest game reserve. This scenic hike through Hengstboden (1,628 meters) descends to Ämpächli.

The trail is 6 km long and is estimated to be completed in 90 minutes.

The trail is 8 km long and is estimated to be completed in 3.5 to 4 hours.

RIESENWALD is a popular adventure trail for children. It talks about the legends surrounding Martin’s Hole. There are 17 stations scattered in this 2.5-kilometer trail. Some highlights include the following:

The trail is 2.5 km long and is estimated to be completed in 90 minutes.

This is an expedition to the Swiss Tectonic Arena. The Circular Hike Firstboden leads you to a round trip among wildflowers, waterfalls, and a direct view of Martin’s Hole, the magical line of the Glarus Thrust, and Piz Sardona. There is a Tschinglen Railway available for those who do not wish to do the steep ascent.

The trail is 7.9 km long and is estimated to be completed in 4 hours.

How to Get to Elm, Glarus

Elm is accessible by taking a train S25 to Schwanden GL from Zurich. From Schwanden GL, take the bus going to Elm. The cable car station is located in Elm, Sportbahnen.

Elm is 1 hour from Zurich and St. Gallen by car and 2.5 hours from Basel and Bern. There is a huge parking lot across the cable car valley station.