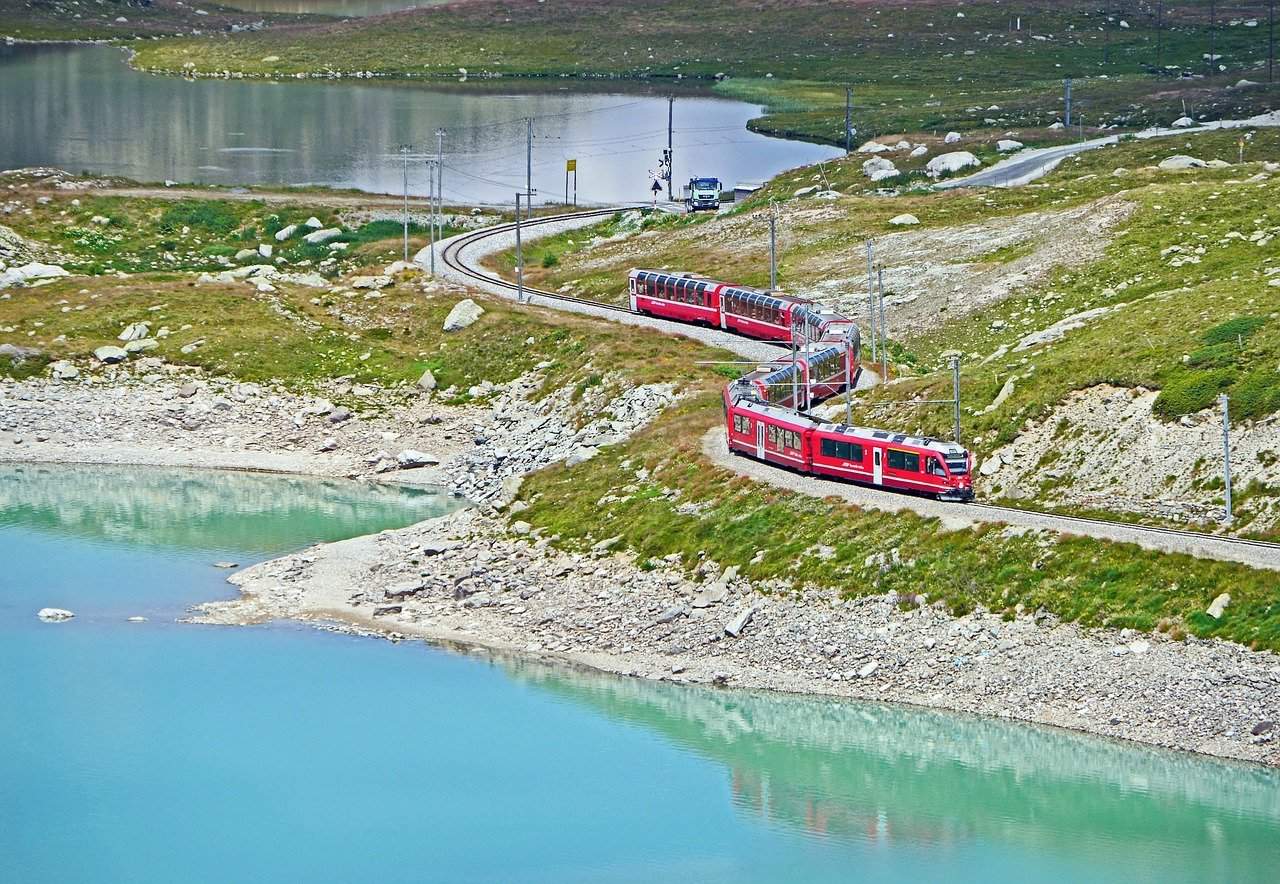 Switzerland is a country with a fantastic train system consisting of thousands of kilometers. The Bernina Express Route is one of the most spectacular ways to discover the Swiss Alps comfortably by the train.

A major tourist route in Switzerland, the Bernina Express route was built to provide its passengers with the best views of the canton Graubünden’s mountains, gorges, and natural landscapes. It begins in Chur (or alternatively Landquart) and ends in Tirano, Italy. The train climbs up to the majestic views of the Bernina Massif before descending to the Italian-speaking side of the region and ending in Italy.

This is a travel guide to provide information on the Bernina Express route from Chur to Tirano, Italy. It discusses the various stops and landmarks along the route. The route runs along the World Heritage Site of the Rhaetian Railway in the Albula and Bernina landscapes.

A total of 196 bridges through 55 tunnels have been constructed. Work on the route started in 1898 (Albula) and 1908 (Bernina). It is considered one of the major tourist routes in the country.

The stops and landmarks along the Bernina Express route are as follows:

Chur is where the Bernina Express route begins.

Chur, the oldest city in Switzerland, dates thousands of years. It is the capital of the canton Grisons (Graubünden in German). It has a beautiful old town, several churches, museums, as well as a local mountain called Brambrüesch.

If you would like to know more about Chur, we have an article that goes into more detail regarding this city – Is Chur Worth Visiting? 8 Fun Things To Do In Chur.

The train moves away from Chur towards Reichenau-Tamins which is where the two sources of Rhine meet to form the Rhine Proper. The two sources are the following:

After Chur, the train passes through the Viamala region of canton Graubünden. Domleschg, the next municipality, is a region filled with churches and castles. Pictured above is the early medieval Church of S. Luregn (St. Lorenz) – a Church that is a Swiss heritage site of national significance.

Domleschg has the highest density of castles in Europe.

Tiefencastel is a village in the Albula region of canton Graubünden. It is located southwest of Chur.

Prior to Tiefencastel is the Schin Gorge. After the Schin Gorge, the train traverses the 85-meter-high Solis Viaduct before going into the Albula Valley.

If you stop in the area, there is a popular restaurant called Restaurant Solisbrücke. Directly beside Solis Bridge, this stop provides a fantastic view of the Solis Viaduct and Lake Solis. Lots of motorists do stop here for a meal or a photo opportunity.

The 62-kilometer Albula line is an engineering masterpiece. It climbs over 1,000 meters in altitude. The train brings travelers from Tiefencastel over to Albula Pass. Finally, it ends in Upper Engadine.

Now comes one of the highlights of the Bernina Express route – the Landwasser Viaduct.

In 2008, the Landwasser Viaduct was listed as a UNESCO World Heritage Site.

The video from MySwitzerland provides a perfect summary of the beautiful landscapes on the Bernina Express route.

From Filisur, the two routes combine and continue until Tirano, Italy.

Filisur is known for its beautiful Engadine houses that you can quickly tour with FiliTour. There is an easy trail from the train station to the Landwasser Viaduct.

In Bergün, you can visit the Bahnmuseum Albula located near the train station. This museum is located along the Albula line of the Rhaetian Railway (Rhätischen Bahn in German). In it, you can learn about the locomotives, the railways, the tunnels, and the viaducts. It is open from Tuesdays to Fridays from 10:00 AM to 5:00 PM, Saturdays and Sundays from 10:00 AM to 6:00 PM. It is closed in November.

The train ride from Bergün to Pontresina is full of curves and loops. The train moves at a steady pace and it is nothing to worry about. Then you will reach Preda at 1,800 meters above sea level and go inside the Albula Tunnel. On the other side of the Albula Tunnel is Engadine.

After going out of the Albula Tunnel, the train reaches Spinas – a small hamlet in Val Bever, Upper Engadine.

Now the train is in the famous valley of Engadine.

Now the train is around halfway through the Bernina Express route in Pontresina.

Pontresina is a mountain village in Upper Engadine that is surrounded by beautiful natural landscapes. It is famous for the Capricorns (Alpine Ibex) that come down from the mountains during springtime to graze. You can see them in the Ibex Paradise.

Pontresina is also near Morteratsch Glacier as well as the Roseg Valley.

If you would like to read more about Pontresina, check out our article Visiting Pontresina, Switzerland: 8 Best Things To Do.

St. Moritz is known worldwide due to its hosting of the Winter Olympic Games back in 1928 and 1948. It also stands for beauty and luxury with its five grand hotels. It offers modern amenities amidst the backdrop of unspoiled natural landscapes.

St. Moritz sits above the Lake St. Moritz (St. Moritzersee in German). It is surrounded by lots of other alpine lakes like Lake Staz, Lake Champfèr, and Lake Silvaplana.

If you would like to read more about exploring St. Moritz, you can check this article: How to Spend 1 Day in St. Moritz, Switzerland.

At the highest point on the RhB, 2,253 meters above sea level, you will find the Ospizio Bernina. Here, visitors can delight in the cultural and natural surroundings and enjoy the impressive Swiss Alps. This place is extremely gorgeous. Thanks to the panoramic cars, you will definitely enjoy unrestricted views of the unspoiled Alpine panorama.

Alp Grüm, more than 2,000 meters above sea level, is in the middle of the Engadine mountain scenery quite close to the Bernina Massif. There is a hotel and a restaurant here with a scenic view of the Palü glacier and Bernina massif.

From Alp Grüm, the train exits the Engadine valley and heads to the Italian-speaking part of canton Graubünden – Val Poschiavo.

If you would like to read more about Alp Grüm, check out our article Experience Alp Grüm At Least Once In Your Lifetime.

Poschiavo is located in one of the four valleys of the Italian-speaking Graubünden together with Val Bregaglia, Mesolcina, and Calanca. It is connected to the rest of Switzerland through the Bernina Pass.

Poschiavo also has its own lake called Lago di Poschiavo located to the south of the village.

If you would like to read more about Poschiavo, check out our article 9 Best Things To Do In Poschiavo, Switzerland.

Le Prese is a hamlet on the north of the Lago di Poschiavo. Le Prese is an ideal starting point for various hikes in the region to Lagh da Saoseo and Lagh da Val Viola, and many more.

Campocologno is a railway station in the municipality of Brusio. Another interesting landmark here is the Brusio Circular Viaduct. This station is located at the border between Switzerland and Italy. The train then crosses over to the Italian side.

Or you can also simply ride the train back to Chur.

Summary of the Bernina Express Route