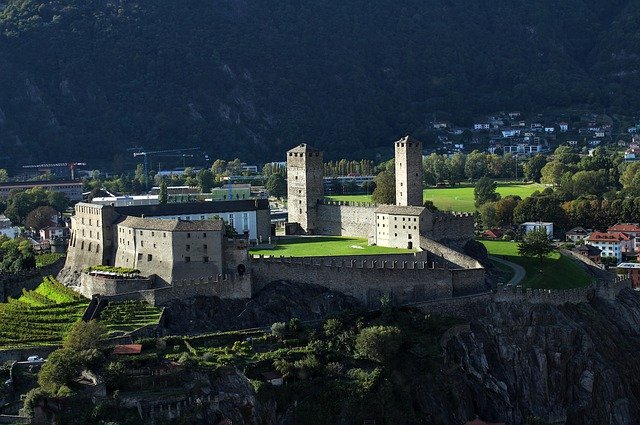 One of Switzerland’s most popular vacation spots is Ticino. This Italian-speaking region is located in Southern Switzerland. Ticino is generally warmer than the rest of the country. It has beautiful mountains, valleys, and lakes. The canton, heavily influenced by its neighboring country Italy, also has a fascinating history.

Numerous tribes have inhabited Ticino over the years, including the Lepontii (an ancient Celtic tribe) and the Romans. Milan and Como communes fought over it at one point. Finally, it became part of the Swiss Confederation in the fifteenth century.

Let’s take a look at some historic landmarks in Ticino in this article. These are primarily religious landmarks, such as churches.

One of the most important religious and historical sites in Ticino is the Sacred Mount Madonna del Sasso. A vision of the Virgin Mary is said to have occurred at this Franciscan site. It was consecrated in 1487. With the lake and mountains as its backdrop, the views leading to and inside the church are stunning.

The Locarno-Madonna del Sasso funicular makes getting there easy. Furthermore, it is near the base station of the Orselina-Cardada-Cimetta cable car.

Canton Ticino’s most important and historical monument – the three castles of Bellinzona. Bellinzona is the second-largest city in Ticino and the capital of the canton.

There are three important castles in Bellinzona: Castelgrande, Montebello, and Sasso Corbaro. The fortifications here benefitted the entire region due to their strategic location at the crossroads of several important Alpine routes.

All three castles – Castelgrande, Montebello, and Sasso Corbaro – have been listed as UNESCO World Heritage sites since 2000.

Castelgrande is the most impressive and well-known of the three, while Sasso Corbaro is the highest.

The castles of Bellinzona are the only medieval military complex in the Alpine region. There are many beautiful views of the surroundings from the high towers. A visit to the fortifications is always interesting.

Riva San Vitale Baptistery is located in Mendrisio, Ticino, Switzerland, in a town of the same name. Apparently, this area is ancient and was an important town during the Roman period. Given that its port was heavily utilized during the Como and Milan decade-long war, its location is quite strategic.

The Baptistery was built during the Roman era and is among the oldest Christian sites in the country. It is constructed of local stone. Its interior is decorated with frescoes and mosaics.  This historical landmark was restored between 1953 and 1955.

At Giornico, the Church St. Nicolao (Chiesa di San Nicolao in Italian) is a Romanesque masterpiece. This church dedicated to Saint Nicholas is now a national monument. Built back in 1210, it is a masterpiece of Romanesque Art. It also has other churches (San Michele, San Pellegrino, Santa Maria del Castello) and historic houses with frescoes. Most of these churches were built during the 12th century.

Giornico is a small, serene village at the end of the Leventina Valley with approximately 850 residents. Located near Bellinzona, this village has an incredibly rich cultural heritage.

From the promenade of Morcote, you can follow the stairs all the way up to the Santa Maria del Sasso Church (Chiesa di Santa Maria del Sasso in Italian). There are approximately 400 steps leading to the Church. From above, the view is stunning. There is a view of the lake as well as Italy across the water.

The interior is decorated with beautiful frescoes.

San Carlo Church in Negrentino is a historical Romanesque church located in Acquarossa. It is one of the most fascinating in Ticino thanks to its Romanesque and late-Gothic frescoes. The construction of this cathedral began in the 11th century and was completed in the 12th century.

Well-marked and paved paths lead to it. And a stunning view of Blenio Valley is also visible from the church.

Castle Visconteo now hosts an archeological museum with exhibits from the Bronze Age to the Roman Period in the Locarno area. Therefore, it covers the period from the 13th century BC to around the 4th century AD.

Among the most important collections of Roman glass in Europe is that of the Castello Visconteo. I highly recommend checking it out.