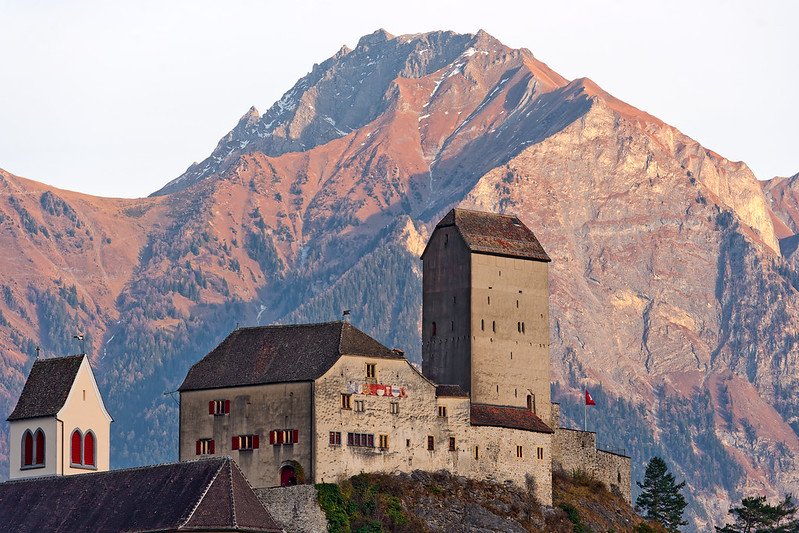 The landmark of Sargans is the castle on top of the hill. It sits beside a small vineyard and offers a wonderful view of the Sarganserland region. Although it is not as well known other castles, Sargans Castle is also worth discovering. Located at the foot of Mount Gonzen (1,830 meters above sea level), it overlooks the Sargans plains.

Sargans Castle in Switzerland is an interesting castle to visit. In fact, it won the “Museum of the Year in Europe” in 1983. In Roman times, a watchtower used this location to oversee the plains, the Rhine, and Seez valleys.

The castle tower measures 8.5 by 5.3 meters inside. It is a five-story tower made of blocks of porous rock and plastered masonry. The former high entrance is on the southeastern side of the first floor.

The castle itself consists of many parts. It has defense towers and residential towers. The living area used to be on the third floor. It also has cellars, underground passages, and thick fortification walls. The castle courtyard joins from the keep to the north and west.

Where is Sargans Castle located?

Sargans Castle (Schloss Sargans in German) is a castle in Sargans. The municipality of Sargans is in Canton of St. Gallen, Switzerland. Its eastern border is the Rhine River and Liechtenstein. Sargans lies between the Rhine and Seez valleys. And the Sargans Castle sits on top of a hill near Mount Gonzen.

During Roman rule, Sargans was an important transit country. In fact, it was a recognized county of the Holy Roman Empire. It was also a strategic point for the North-South trade. There were two trade routes during the Roman period. The first one is from Lake Constance via Sargans to Chur. The second one is from Zurich via Sargans to Chur.

In 1859, Sargans became an important junction for the train lines. It is here that the North-South and East-West train lines meet. On the highway, N3 and N13 meet in Sargans. Nowadays, Sargans is still a juncture between Chur and Zurich.

Other sites worth visiting in Sargans are the following:

Why is Sargans Castle worth visiting?

Sargans Castle is a Swiss heritage site of national significance. The Counts of Montfort-Werdenberg-Sargans built it in the 12th century. They chose a prominent location overlooking the valley.

First, they built the tower for one of their vassals. Later on, the counts established the town at the foot of the castle. It was thereafter linked to the fortress using long stairs. Then the counts used this castle as their seat in the region.

For seven generations, several feudal lords ruled over the lands. The border extended even to the San Bernardino Pass in the south and Lake Constance in the north. Enemies attacked the castle several times in the 15th century. Yet, it was never conquered. In 1483, Count Jörg of Sargans sold the fortress to the Seven Old Cantons of the Swiss Confederacy.

From 1483 to 1798, the bailiffs who used the castle renovated and expanded it. The district courtroom is of national importance. This is due to the precious paintings of the bailiffs’ coats of arms.

Since 1899, the castle belonged to the Community of Sargans. The castle was renovated in 1969 and 1970. It is open to the public. On the castle grounds, you can see a wine press cellar, the museum, and a restaurant.

How can I get to Sargans Castle?

The address is Schloss Sargans, 7320 Sargans. It is also possible to walk from Sargans train station which is one kilometer away.

Is there an entrance fee for Sargans Castle?

The museum ticket costs CHF 10 for adults and CHF 5 for children between 6 and 16 years old. Discounted prices are given to groups of 15 or more, students, and apprentices.

What are the opening hours of Sargans Castle?

Museum Sarganserland is open from April 1 to October 31.

What can I do at Sargans Castle?

Each floor of the museum has interesting artifacts and tidbits of information. The exhibits touch on local life, geography, and personalities.

Furthermore, there is a new children’s trail in the castle museum. The trail opened in August 2020. Children must find the puzzle answers on the castle premises. They follow the castle’s medieval inhabitants – Count Jörg and Countess Anna. The count and countess have prepared 15 exciting stations. Each station has information about castle life or various activities. There is also a surprise gift for those who finish the task.

There is a restaurant in the castle grounds. In summer, the castle terrace is available to relax and enjoy the sun. The view here of Sargans and its surroundings is wonderful. Furthermore, the castle can be a wedding event venue. Couples interested in marrying here can contact the local registry office (Zivilstandsamt Sarganserland)

Our visit to Sargans Castle was enjoyable. We came in with not a lot of expectations. Yet, we came out grateful to have visited it.

Coming in, the first room to the left is the wine cellar. Walking past it, to the right, is the museum entrance. I remember that there were beautiful paintings on the walls near the entrance.

The lowest floor had a cinema playing video footage. On its walls were various posters explaining the history of Sargans. It also had a list of all the tourism spots of the region.

The other floors above contained the following information or artifacts:

So as you can see, there was a myriad of items presented in the museum. It might seem hodgepodge but in essence, it presented life in Sargans in the past and in the present. It was definitely interesting to visit. We learned a lot and in the process, got to do fun activities.