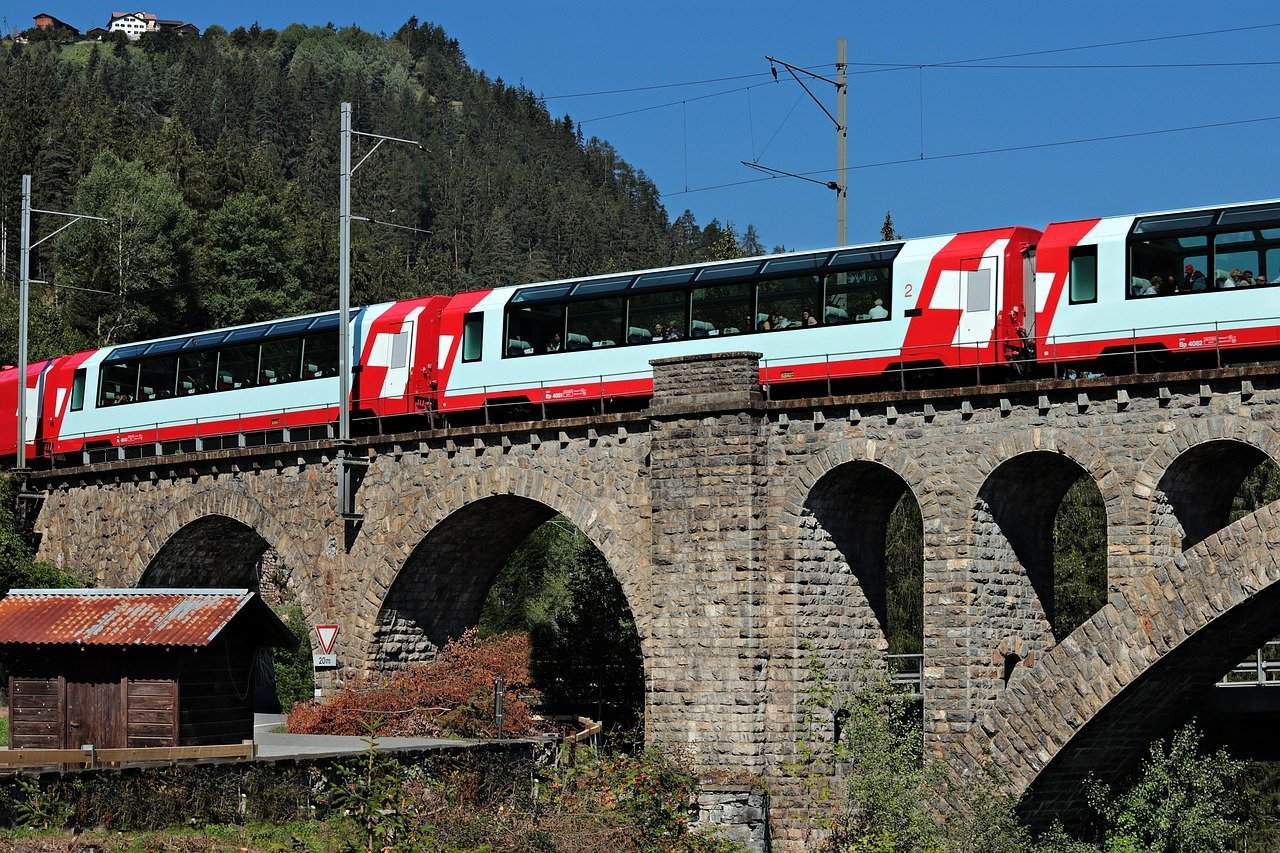 Switzerland has a train network that runs for thousands of kilometers. One of the best ways to see the Swiss Alps is by train on the Glacier Express Route.

The Glacier Express runs between Zermatt in Valais and St. Moritz in Graubünden over 291 bridges and 91 tunnels. This train route takes you from the home of the Matterhorn to St. Moritz, a fancy mountain resort in Engadine.

During the Glacier Express ride, you’ll see both the Swiss Alps Jungfrau-Aletsch region and the Albula/Bernina landscapes. Also known as the slowest express train in the world, this train traverses the most scenic parts of Switzerland, with mountains, streams, and towering rock formations.

This is a travel guide to provide information on the Glacier Express route from Zermatt to St. Moritz. It discusses the various stops and landmarks along the route. The route also runs along the World Heritage Site of the Rhaetian Railway in the Albula and Bernina landscapes.

The stops and landmarks along the Glacier Express route are as follows:

In the morning, the Glacier Express Train leaves Zermatt for St. Moritz. This journey starts at 1,604 meters above sea level and offers some spectacular scenery, including a lot of big peaks along the way.

With its typical chalet-style houses and the world-famous Matterhorn, the mountain village of Zermatt in Valais is gorgeous and charming. Surrounding the village of Zermatt are larch forests and 38 4,000-meter peaks. Zermatt is in the southernmost German-speaking area of the country.

Zermatt has been a popular destination for decades. Keeping cars out of the village since 1961 makes it a great place for walking. The village’s main street has bars, restaurants, bakeries, cake shops, and chocolate shops. They also have boutiques, sports shops, and souvenir shops.

The Kirchbrücke Bridge and Church of Saint Mauritius offer postcard views of the Matterhorn in Zermatt. Among the most notable mountains around Zermatt are the Monte Rosa (4,634 meters high, the highest peak in Switzerland) and Dom (4,545 meters high).

After departing Zermatt, the train will pass through massive rock walls and mountains that rise to dizzying heights. There will be a lot of sights to see before the first stop which will happen after 1 hour and 18 minutes.

The Glacier Express stops in Brig, a historic town in Switzerland’s southwest. Due to its location at the foot of the Simplon Pass, it was destined for growth and prosperity.

Brig is a picturesque town and a hub for trains and buses that connect the best ski resorts around Valais.  The following railway lines pass by Brig and lead passengers to various locations:

Brig has the Stockalper Palace, built by a merchant who monopolized the Simplon Pass trade. The palace, built over 20 years, has a great hall and an altar, too.  It also served as his warehouse.

The train then goes through the long and narrow Furka Tunnel. This tunnel is 15 kilometers in length and has an elevation of 1,550 meters at its highest point. The Glacier Express then heads to its second stop – Andermatt.

Andermatt is charming and beautiful like a Swiss mountain village should be. Following major investments, it turned into a bustling mountain town. Andermatt is nestled in the Ursern Valley, at the head of the Reuss River, surrounded by the Adula Alps. Located strategically at the crossroads of the Swiss mountain pass from north to south and east to west, it’s no wonder Andermatt picked up as an important tourist destination in Switzerland.

Andermatt is a beautiful, authentic Alpine village that sits in the Swiss Alps. The Andermatt Swiss Alps Golf Course, with its 18-hole golf course, has made Andermatt a year-round destination. It’s also got the largest ski area in Central Switzerland, SkiArena Andermatt-Sedrun.

The train gradually makes its way up the mountains, until reaching Oberalp Pass.

Oberalp Pass is the highest point of the Glacier Express Route at 2,033 meters.

Around an hour after leaving Andermatt, the train passes through Oberalp Pass and gets to Disentis/Mustér.

Disentis (German) or Mustér (Romansh), is a community in the Surselva district in the northwest of the canton of Graubünden.

This village is the home of one of the oldest Benedictine monasteries in Switzerland dating back to 720. The Disentis Monastery is a baroque complex that houses a Romansh library, a monastery museum, a farm, a bistro, and a pilgrim hall.

Midway through the trip, the Glacier Express makes its lowest stop in Chur.

Chur, the oldest city in Switzerland, dates thousands of years. It is the capital of the canton Grisons (Graubünden in German). It has a beautiful old town, several churches, museums, as well as a local mountain called Brambrüesch.

If you would like to know more about Chur, we have an article that goes into more detail regarding this city – Is Chur Worth Visiting? 8 Fun Things To Do In Chur.

The train moves away from Chur towards Reichenau-Tamins which is where the two sources of Rhine meet to form the Rhine Proper. After Chur, the train passes through the Viamala region of canton Graubünden before making a stop in Tiefencastel.

Tiefencastel is a village in the Albula region of canton Graubünden. It is located southwest of Chur.

Prior to Tiefencastel is the Schin Gorge. After the Schin Gorge, the train traverses the 85-meter-high Solis Viaduct before going into the Albula Valley. From here on, you’re going to get beautiful views of the Albula/Bernina region, a route also used by the Bernina Express.

If you stop in the area, there is a popular restaurant called Restaurant Solisbrücke. Directly beside Solis Bridge, this stop provides a fantastic view of the Solis Viaduct and Lake Solis. Lots of motorists do stop here for a meal or a photo opportunity.

In 2008, the Landwasser Viaduct was listed as a UNESCO World Heritage Site.

The municipality of Filisur in the Albula region is where the two rivers meet – Albula and Landwasser.

Filisur is known for its beautiful Engadine houses that you can quickly tour with FiliTour. There is an easy trail from the train station to the Landwasser Viaduct.

Upper Engadine’s capital is Samedan, with 2,500 people. Samedan’s geographical location where the valley is the widest helps its economic and political importance. It’s a trade and industrial center, as well as a train hub. A lot of private planes and gliders fly out of Samedan’s airport.

You’ll find beautiful houses, businesses, hotels, and restaurants there. Among the places to visit in Samedan are the following:

Both Chesa Planta and the Sacred Heart Church are listed as heritage sites of national significance.

The Glacier Express journey comes to an end in St. Moritz. St. Moritz is known worldwide due to its hosting of the Winter Olympic Games back in 1928 and 1948. It also stands for beauty and luxury with its five grand hotels. It offers modern amenities amidst the backdrop of unspoiled natural landscapes.

St. Moritz sits above the Lake St. Moritz (St. Moritzersee in German). It is surrounded by lots of other alpine lakes like Lake Staz, Lake Champfèr, and Lake Silvaplana.

If you would like to read more about exploring St. Moritz, you can check this article: How to Spend 1 Day in St. Moritz, Switzerland.

Summary of the Glacier Express Route

Some days, only one train goes per direction. Make sure that you check the website www.sbb.ch for details.

Some of the highlights of Glacier Express include:

In case the timing doesn’t work out for you, you can always take an intercity or regional train instead. Or you can just take the Bernina Express Route, which starts in Chur and ends in Tirano, Italy.