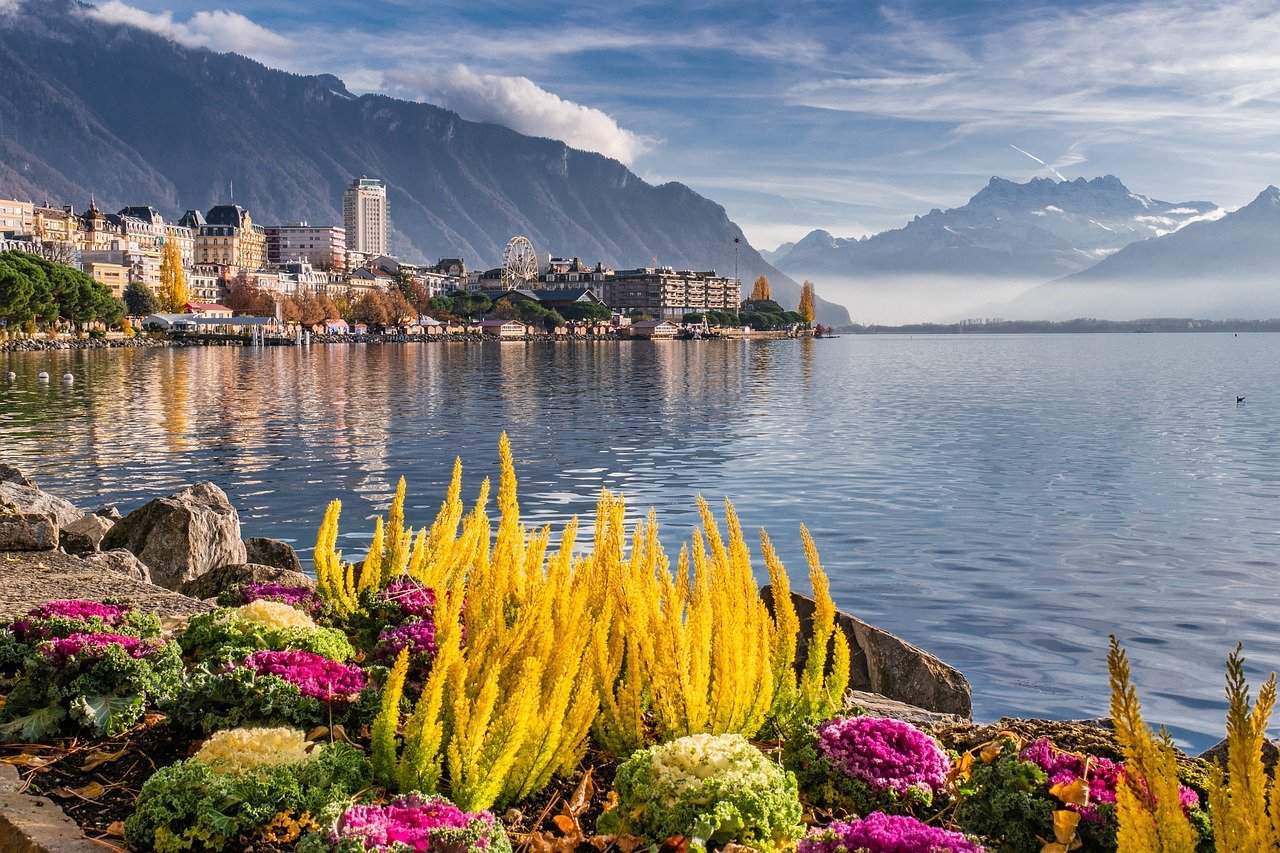 If you have often heard the name Montreux, you might be wondering why it’s so popular. Why is Montreux so famous? Why does it appear so often in travel literature about Switzerland? As far as resort towns go, Montreux is the most popular one along Lake Geneva.

Montreux is a charming town on the northeastern shores of Lake Geneva in the canton of Vaud, Switzerland. Besides its spa facilities, Montreux is famous for its mild climate, awesome views, and the Montreux Jazz Festival. A stretch of eight kilometers runs from Clarens, through Chillon Castle, and up to Villeneuve. Together with Vevey-Montreux, it has an estimated population of 85,000.

This town’s center is called Riviera (or Riviera vaudoise). This famous and highly frequented resort is the mildest on the north side of the Alps. Thanks to its mild climate, you can expect to see plants that you won’t normally find anywhere else.

Montreux has a relaxed, touristy feel. There is a picturesque promenade flanked by opulent hotels, such as Fairmont Le Montreux Palace and Hotel Eden Palace au Lac. Across the promenade, you can see Dents du Midi mountain.

Here you will find information about Montreux, its history, as well as things to see and do in the region.

The region was not only occupied by the Romans. Other rulers who lived or occupied this place included the princes of Savoy, the Swiss in Bern, and the Huguenots from Italy.

The introduction of wine to the region dates back to the 12th century. From Lavaux to Montreux, sunny slopes proved to be a successful area for growing grapes.

Tourists began flocking to New Heloise after reading the novel Julie ou La Nouvelle Héloïse by Jean-Jacques Rousseau. As a result of the novel’s admiration for the place, it attracted tourists and stimulated the tourism industry.

The list of notable visitors to Montreux includes Lord Byron, Mary Shelley, Igor Strawinsky, Edgar Wallace, and Vladimir Nabokov. For a time, the famous band Queen also lived in Montreux, setting themselves up in a studio there to record their album.

Best Things to Do in Montreux

Monteux is known for its mild climate, blooming flowers, and eight kilometers of coast. Apart from the lakeside promenade and marina, here are some things to do in Montreux:

Montreux’s beautiful promenade is its highlight, but its old town is also worth exploring. Just ten minutes’ walk from the lake, the path ascends a bit to the hill. In the old town, you can see charming houses and cobbled stone streets, as well as the village below. From the old town, you can also take numerous walks, including the Chauderon Gorges Path.

Montreux is followed by Glion, Caux, and finally the fantastic viewpoint of Rochers de Naye. It takes 10 minutes to reach the peak from the train station. From here you’ll be rewarded with fantastic views of the Jura and Savoy Alps, as well as Lake Geneva (Lac Leman). Afterward, you can visit La Rambertia, an alpine garden.

I took the above picture from inside the cog railway train when it headed to Rochers de Naye.

There is a romantic, island castle about 2.5 kilometers from Montreux called Chillon Castle. Chillon” means rocky platform in an ancient language.

The castle was built by the house of Savoy and is listed in the Swiss Inventory of National and Regional Significance. A castle sits on a lake.

Because of its strategic positioning, it was able to control the road from Great St. Bernard to Italy. This structure dates back to the 9th to 10th century and was expanded well into the 13th century. In 1801, the castle was turned over to the Canton Vaud after the Savoy families and Bernese bailiffs had used it. It served as a prison for the state.

Novelists such as Victor Hugo, William Turner, and Alexandre Dumas have written about it. The castle is indeed beautiful. It is one of Switzerland’s most beautiful castles.

Today, you can visit the castle. You can either tour it on your own or with a guide.

Montreux hosts the Montreux Jazz Festival, one of the world’s biggest jazz festivals.

Maison Visinand is a beautiful house in Rue du Pont 32. Originally constructed in 1592, the house is now a cultural center with exhibits.

Located in a 17th-century building in Rue de la Gare 40, the Montreux Museum (Musée de Montreux) exhibits Montreux’s history. You will learn about the beginnings of tourism in the Belle Epoque period here. Opening dates for the museum are April through November.

St. Vincent’s Church is a stunning Gothic structure dating from 1507 with fantastic views of the town. It is possible to hear the Metzler Organ from the inside of the church.

Here is a list of the various sites in Montreux which have been listed as Heritage Sites of National Significance:

You can book the Fairmont Le Montreux Palace hotel below on Booking.com.

Many people consider Lake Geneva to be an amazing tourist destination. Not only is it absolutely beautiful, but the weather here is also very pleasant. In the Lake Geneva region, Montreux is the most popular spa town.

The city has a colorful history with the presence of the Savoy and Huguenots, as well as the Swiss. Due to its natural beauty and strategic location, it has attracted rulers and novelists alike. With the advent of tourism, the place became a resort town filled with opulent palaces, castles, and churches. Nowadays, most of these beautiful structures are listed as heritage sites of national significance.

There is a reason why Montreux is so famous. This is a place I would definitely recommend. It is worth visiting if you are already in the Lake Geneva region.

My favorite places in this region are Chillon Castle (one of Switzerland’s most beautiful castles) and Rochers de Naye (for the fantastic views).