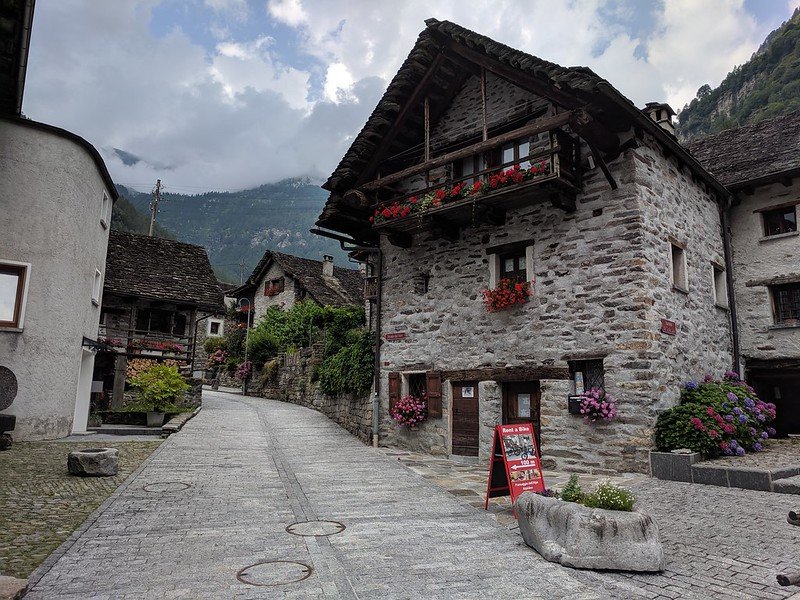 Ticino might be a small canton in southern Switzerland. But it has more than enough charm. Bordering Italy, the residents of this canton speak predominantly Italian. Its climate, architecture, and landscape are also closely related to that of Italy. They have pretty little towns, flower-lined promenades, medieval castles, and Alpine peaks nearby.

In Ticino, there are exciting towns and cities such as Lugano, Locarno, and Bellinzona. But for now, let us have a look at the smaller villages in this region. Because they also definitely have tons of beautiful little villages worth visiting. In this article, we have listed some of the most beautiful villages in Ticino. Some communities have only a handful of residents, while others have hundreds. Most of these areas are in the valleys beyond the larger towns, away from the hustle and bustle of life. Nonetheless, these idyllic settlements can somehow feel like a step into the past.

Despite its small size, Corippo is one of the most beautiful villages in Ticino. This picturesque village lies in Locarno, Ticino. On the western slope of the Verzasca Valley, it sits on top of a steep hill.

Corippo is currently under national historical protection under the Inventory of Swiss Heritage Sites.

Stone houses – all grey and thick – are built of stone. The houses are made to withstand treacherous weather, and the windows are small, with white lime around them.

Nowadays, it is the least populous municipality of Switzerland. It is home to only nine inhabitants as well as numerous stone houses made of granite and slate roofs.

As of October 2020, the village of Corippo has merged with four other villages to form a new municipality called Verzasca (see note).

If you would like to read more about Corippo, check out our article Corippo, Switzerland: Ticino’s Charming Hilltop Village.

Giornico is a small, serene village at the end of the Leventina Valley with approximately 850 residents. Located near Bellinzona, this village has an incredibly rich cultural heritage. This was the site of a historical win on the 28th of December 1478. On this day, 600 men from this village defeated a much bigger army from Milan. What used to be an important axis for the north-south Alpine route, this place has been since replaced by the Gotthard train line.

At Giornico, the Church St. Nicolao is a Romanesque masterpiece. This church dedicated to Saint Nicholas is now a national monument. Built back in 1210, it is a masterpiece of Romanesque Art. It also has other churches (San Michele, San Pellegrino, Santa Maria del Castello) and historic houses with frescoes. Most of these churches were built during the 12th century.

Degli Stanga is the home of the Leventina Ethnographic Museum. Built in the 16th century, it is covered by the coat of arms of its important guests. Inside, you can find tools, costumes, and art from the Leventina Valley. You can also visit Museo La Congiunta for sculptures.

In case you are interested in visiting a Grotto, Grotto dei due Ponti lies on an island and can be accessed using two bridges. They serve simple, local food from the region.

For more information regarding Giornico, you can contact the tourist office – Ente turistico di Leventina at http://www.leventinaturismo.ch.

The village of Morcote has been named as the most beautiful village of Switzerland by media entities back in 2016. This award is presented in particular by SRF and Ringier Media. Morcote is located about 10 kilometers from Lugano. It also sits on the Lake Lugano shore and has a fantastic view of Brusino Arsizio and Varese (Italy) on the other side of the lake.

If you start from the promenade, you can follow the stairs going all the way up to visit the Santa Maria del Sasso Church. There are around 400 steps going to the Church. Inside, it has beautiful frescoes. The view from above is also beautiful.

Next door is Parco Scherrer. It is a garden with magnolias, oranges, bamboos, and various other plants. This park was established by the textile merchant Hermann Arthur Scherrer.

If you would like to read more about Morcote, check out our article The Pretty Village of Morcote in Ticino.

Bosco Gurin is located in the Vallemagia district of Ticino canton. In particular, it is in Val di Bosco, 35 kilometers northwest of Locarno. Its residents are mostly German-speaking (Gurinerdeutsch) despite being officially within the Italian-speaking Canton Ticino.

At 1,506 meters above sea level, it is also the highest mountain village in Ticino.

Bosco Gurin is a one-of-a-kind, cultural landscape in the middle of the alps. It is definitely worth exploring. The village is special because it is one of the few places in Switzerland where the village remains unchanged from how it was in the past. The architecture remains special thanks to Hans Anton Tomamichel who made Sgraffiti in Bosco Gurin popular. These are the white engravings on the house facades.

The village has around a hundred houses, barns, and stables. There is also a small ski lift in the village called Sonnenberg.

If you would like to read more about Bosco Gurin, you can check out our article History of Bosco Gurin And Why It’s Worth A Visit.

Lavertezzo is popular due to the Roman bridge Ponte dei Salti. The bridge goes over the Verzasca River and is one of the most famous spots in Verzasca Valley. It also has an 18th-century church with baroque features

Foroglio in Bavona Valley is home to one of the most spectacular waterfalls in Ticino. Bavona Valley (Val Bavona) is known as the wildest valley in the canton. The 19-kilometer-long Bavona River runs through this side valley of Maggia Valley.

The village is beautiful and charming, similar to other villages in the valley. But the old stone houses amidst the backdrop of trees, the river and the Foroglio Waterfall makes it incredibly special.

Foroglio Waterfall, the 110-meter Waterfall is worth visiting.

Sonogno is a village in the Verzasca Valley within the district of Locarno. It has well-maintained granite houses and alleyways. Sonogno also has a museum and a sheep’s wool workshop (Casa della Lana). It is located at the very end of the valley. Around 96 residents live there.

As of October 2020, the village of Sonogno has merged with four other villages to form a new municipality called Verzasca (see note). One of the other four villages is Corippo, as mentioned above.

Verdasio is a small mountain village in Centovalli. Like Corippo, it does not have a lot of permanent residents. oIn fact, there are only 20 reported residents here. It is part of the Inventory of Swiss Heritage Sites.

The Santi Giacomo Maggiore und Cristoforo Church built back in 1578 is worth visiting. Furthermore, another site worth exploring is the Madonna della Segna Chapel. There are also some historical houses such as Casa Tosetti, Casa Cavalli, and Casa de Martini.

In addition to the villages listed above, Ticino has many other picturesque villages. Besides the villages on the list, we have included a few more below.