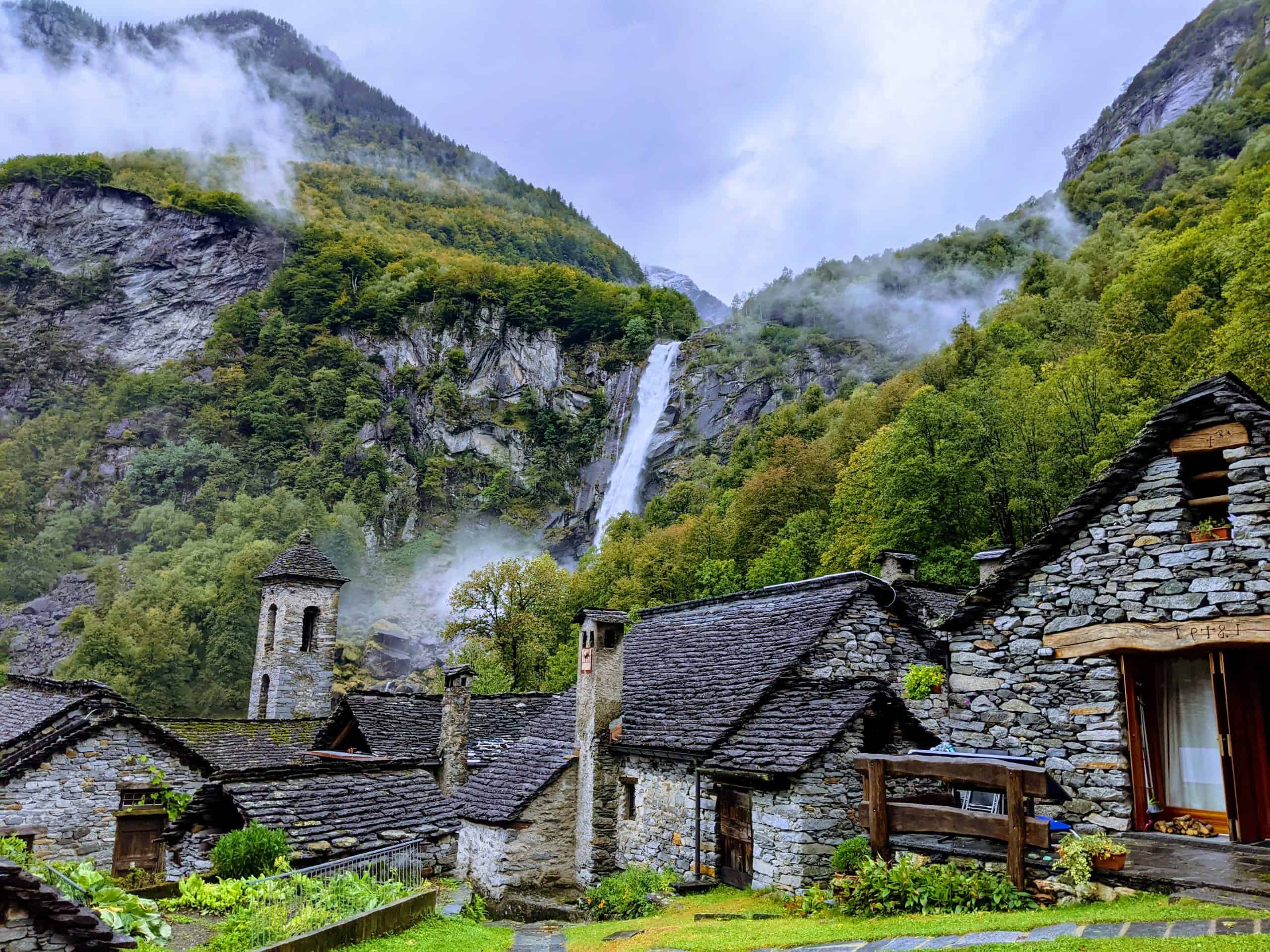 Bavona Valley (Val Bavona) is known as the wildest valley in Canton Ticino. In fact, the valley was only connected to the main road in 1950. For some visitors, Val Bavona is even considered the most beautiful of the valleys in the canton. The 19-kilometer-long Bavona River runs through this side valley of Maggia Valley.

Contents hide
1 Hiking Tips
2 Our Experience Hiking in Val Bavona
3 How do I get to Val Bavona?
4 How to get to Foroglio Waterfalls?
5 What can I visit in the valley?
6 Related Posts

Our first hike in the wild Bavona Valley was extraordinary. The stone houses in each terre were idyllic and old. Left and right, we saw huge slabs of stone. Waterfalls cascade from everywhere. And the waters in the river come rushing. Furthermore, the whole valley was not filled with tourists. Compared to other places in the canton, Bavona Valley was quiet.

The valley is a trough valley like a page out of a geology book. On its sides are huge granite walls. It begins in Bignasco in the middle of Maggia Valley. Then it goes northwest. At the end of the valley is the village San Carlo. In San Carlo, you can get on the cable car up to Robiei enjoy a beautiful viewpoint of the valley.

Until the 16th century, the village still had regular residents. Nowadays, only the main village Cavergno has residents the whole year-round. The rest of the valley only sees either seasonal residents or guests with holiday homes.

Life in Bavona valley is hard. The villages do not have electricity. Tourism is not a huge economic turbine. And the valley has harsh living conditions – rains, erosions, and rockfalls. Capanna Cristallina, for example, saw several avalanches by 1999. Because of this, the hut now stands in Passo di Cristallina where it is safer.

Bavona Valley has seen time and again huge rocks falling from mountains. The stones are sometimes as huge as houses. And after the stones fall, the locals build new houses beside it. In fact, the locals call it Splui.

The list of calamities in the region is not surprising for anyone who has seen rainy days in Bavona. The water volume is huge that you see the catastrophic impact afterward. Harsh living conditions and economic hardship drive emigration among the population.

Did you know? Although the valley produces electricity through three powerplants and reservoirs, it is actually not electrified. That’s right! Only Caverno and San Carlo have electricity in the valley. The rest get their electricity from solar energy, gas, and small water turbines. Old-fashioned candles are also still used here.

Take the bus to Sonlerto. From Sonlerto, walk on the left side until you reach Foroglio. From Foroglio, you can stop over and eat at the restaurant near the bridge. Then you can either take the bus back to Locarno or walk further. Note that the bus hardly comes to this area so make sure you check the bus pick-up times.

Foroglio is an interesting place because this is where the Calnègia Valley (Val Calnègia) meets the main valley of Bavona. However, the intersection does not occur at the same altitude. Hence, the Calnègia Valley is around a hundred meters higher. This means that the water from Calnègia flows right into Bavona and shows this beautiful waterfall in Foroglio.

For those who walk further, there is another restaurant. Grotto di Baloi in Fontana has a wonderful location. It is near the beach and a waterfall. It also has its own trout farm. Because of the lack of electricity, cooking is done with a gas tank. Evenings are spent in candlelight.

There is another hiking tip in Robiei. It is an easy circular trail that is 5 kilometers long. The trail is called Robiei and the lakes at the Basodino’s Glacier Foot. It goes around Lake Robiei with the Basodino Glacier at the backdrop. It is accessible from San Carlo in Bavona Valley with the cable car.

Our Experience Hiking in Val Bavona

The hike we chose was Val Bavona: Sonlerto – Waterfall of Foroglio – Bignasco. We parked our car in Bignasco, Posta. From there, we took the bus until Sonlerto. However, trees blocked parts of our trail near Faedo. (It rained for two days before our hike). So we had to walk partially on the main road. We passed by several small hamlets called terre. The small stone houses were charming and simple. Some were built beside huge rocks.

The paths in the forest were easy to navigate. As the roads are practically empty, this wasn’t a huge issue for us. As soon as we cleared the path with fallen trees, we were able to go back to the trails. We passed by Cascata di Foroglio. This is one of the highest and most impressive waterfalls in the canton. The village beside it was also charming. There were stone houses and one even sold gift items. There was also a restaurant near the bridge.

We walked further along the trail and saw more stone houses and waterfalls. There was another pretty spot in Fontana near the grotto. There was also a beautiful stone bridge nearby which is perfect for pictures.

In summary, the trail is absolutely beautiful and not difficult at all. At 10 kilometers, it took us more than the 2.5 hours mentioned in the brochure. But, we did stop often for pictures and we took our sweet time. I highly recommend this hike.

How do I get to Val Bavona?

It is easier to travel by car to Bavona Valley, as the buses do not pass the valley regularly. When we were there, it only traveled three times per day. However, if you want or need to travel by bus, the bus travels from Bignasco, Posta to various stops.

The bus stops are as follows: Mondada, Fontana, Sabbione, Ritorto, Foroglio, Roseto, Fontanellata, Sonlerto, and San Carlo. The bus line is available from April to October. Please check the availability on sbb.ch in any case.

How to get to Foroglio Waterfalls?

You can travel by car and park directly near the waterfalls. If you travel by bus, you can take a bus from Bignasco, Posta, and ride it until Foroglio (Bavona).

What can I visit in the valley?

Each hamlet or village can be visited in itself. They are all beautiful and charming with the old stone houses amidst a backdrop of steep granite walls, lush green meadows, the Bavona river, and waterfalls. San Carlo and Sonogno are charming little villages.

Foroglio Waterfall, the 110-meter Waterfall is spectacular. It is set amidst (again) a beautiful village filled with stone houses. Near the Foroglio Waterfall is also a traditional restaurant that serves local dishes such as Minestrone and Polenta with cheese. If you are athletic, you can make the trek up to Calnègia around 100-meters above Bavona.

Near Grotto di Baloi is an old stone bridge that is also totally Instagram-worthy. Robiei, its lakes, reservoir, and the Basadino Glacier view are also worth visiting.