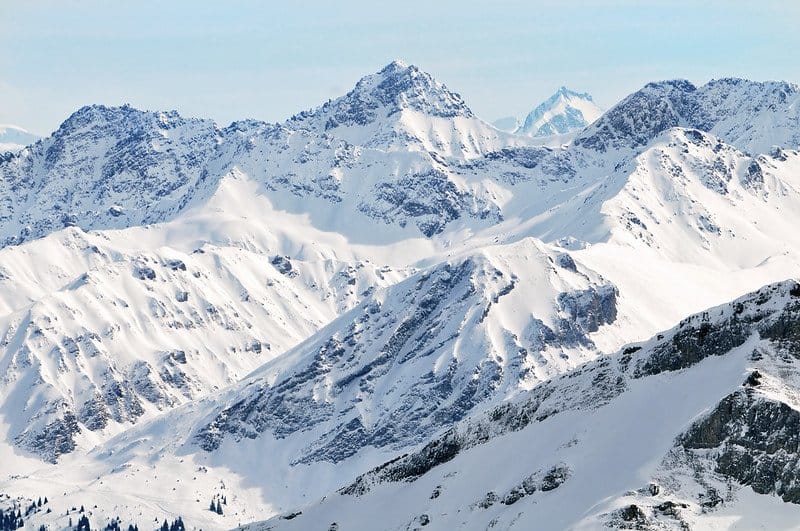 This guide lists the nearest ski resorts to Zurich to help you plan your winter wonderland adventure easily. Convenience coming in from Zurich’s International Airport is foremost in mind while gathering this list. For those coming in from abroad, the travel time from Zurich Airport is also noted.

The total length (in kilometers) of groomed ski slopes are also included in parentheses within each sub-heading.

Sattel-Hochstuckli is a small, family-friendly ski resort in Sattel, Schwyz. It is suitable for smaller children and beginner skiers.

The ride going up to Mostelberg is inside a rotating cable car in 4 various colors (one color for each season of the year). The slopes are generally easy and safe. There is also a small children’s slope near the mountain station.

How near is Sattel-Hochstuckli ski resort from Zurich?

Hoch-Ybrig is a skiing and hiking area in Canton Schwyz. In summer, Hoch-Ybrig offers hiking and biking routes. With the Sternensauser, you can also do the zip line. Hoch-Ybrig is dominated by the mountain range Forstberg, Druesberg, and Twäriberg. From Roggenstock, you can sometimes observe marmots, deers, or chamois.

In winter, Hoch-Ybrig has 50 kilometers of slopes for winter sports. Due to its proximity to Zurich, Hoch-Ybrig tends to be busy on weekends.

How near is Hoch-Ybrig ski resort from Zurich?

The train connection from Zurich Airport going to Hoch-Ybrig Weglosen valley station takes approximately 2 hours one way. The cable car going up to Seebli takes 6 minutes. From Seebli, there are cablecar connections to Spirstock and Sternen. With the car, it is 65.6 kilometers away from Zurich Airport.

The car-free mountain village of Braunwald is in the southernmost part of Glarus canton. It is a tiny, little-known village of less than 400 year-round residents. It offers a breathtaking panorama of the Glarus Alps with Ortstock, Tödi, Biferten, and Hausstock.

In winter, Braunwald has almost 30 kilometers of slopes for winter sports. You can read more information on how Braunwald is during winter in this article – Winter Hiking and Biking in Braunwald.

How near is Braunwald ski resort from Zurich?

The main peak Pizol (2,844 Meters) lies amidst Calfeisen/Tamina Valley, Weisstannen Valley, and Rhein Valley. Two cable cars go from Wangs in Sargans up to the mountains. Once above, we can see a fantastic view of the Rhein valley until Lake Constance. The chair lifts can go as high as Pizol-Bergkamm.

In winter, the ski slopes of Pizol offer various slopes for beginners and advanced skiers alike. Mountain cable cars are modern. There is also the possibility to measure your speed. For younger guests, there is also a FunPark.

How near is Pizol – Bad Ragaz – Wangs ski resort from Zurich?

Flumserberg, part of the municipality of Flums, St. Gallen is a great day trip option because it offers views of the Churfirsten range and Lake Walen (Walensee).

In winter, the ski slopes of Flumserberg offer various slopes for beginners and advanced skiers alike. Flumserberg is a popular day trip for residents of Zurich. It is the biggest ski resort near Zurich outside of Graubünden. (Note: Canton Graubünden has more ski resorts that are bigger but these are further away from Zurich compared to Flumserberg.)

How near is Flumserberg ski resort from Zurich?

There are two options for going to Flumserberg:

The train ride from Zurich Airport to either Unterterzen or Sargans takes around 1 hour and 15 minutes. It takes an additional 30 to 40 minutes to get to Tannenheim or Kabinenbahn. With a car, it is 90 kilometers away from Zurich Airport.

The SkiArena Andermatt-Sedrun is a ski area located in Andermatt (Uri), Sedrun (Graubünden), and Disentis (Graubünden) in Switzerland. It is Central Switzerland’s largest ski area featuring 180 kilometers of pistes with varying degrees of difficulty.

After the day of skiing, either you are hell tired to run on skis, you’ll well board the Matterhorn Gotthard Bahn. The price tag of the train ticket between Disentis and Andermatt-Göschenen is already included in the ski ticket.

In the Matti KidsArena on Nätschen, the Druni KidsArena in Sedrun, and the Saxwiese in Disentis, snow rookies realize their own playground. Magic carpets, follow slopes, a snow playground, and funny mascots abound.

For free riders, there are 16.5 kilometers of deep-powder trails. These are trails protected from avalanches that are neither groomed nor patrolled. It has untouched slopes with a lot of powder, natural drops, and jumps for deep-snow fans.

How near is Andermatt – Oberalp – Sedrun Ski Resort from Zurich?

How near is Arosa Lenzerheide Ski Resort from Zurich?

Arosa has the largest children’s ski school in Switzerland. MySwitzerland produced a good video (with English subtitles) giving an overview of the ski school.

The Flims Laax Falera Ski Resort is one of the biggest and most well-known ski resorts in the Canton of Graubünden. It is popular due to its four snow parks and the world’s largest half-pipe, as well as for hosting winter races and competitions. Due to its size and variety, beginners, advanced skiers, snowboarders, and freeskiers all have ample space to enjoy their sport.

The winter resort of Flims Laax Falera is one of the pioneers of snowboarding. It is also a well-known destination for freestylers owing to its 44 kilometers of free-ride slopes. It used to host ski races back in the 90s. It has since switched to hosting snowboard and freeskiing events like LAAX Open – the most important snowboarding event in the European mountains.

Tickets start at CHF 78 for adults if you book early and CHF 39.70 for children.

To give a visual preview of the resort, check out this video from LAAX Resort.

How near is Flims Laax Falera Ski Resort from Zurich?