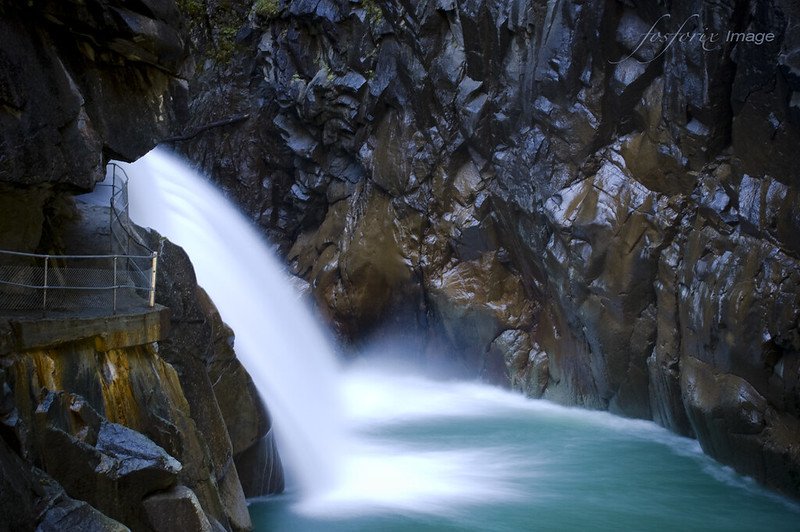 Rofflaschlucht, Roflaschlucht, or Roffla Gorge is a little-known gem worth stopping for in Andeer. Located in Viamala, in the Swiss canton of Graubünden, the Rofflaschlucht has been open to the public since 1907. It lies in one of the few routes crossing over the Swiss Alps to Italy before the Gotthard Tunnel opened.

Rofflaschlucht trail passes through the restaurant and museum, before going into the gorge. This trail is actually under the Rhine River. After exiting the museum, guests go through the rock gallery until the very end. The trail ends behind the waterfalls.

Before the Gotthard railway opened in 1882, Andeer was once the only route to Italy across the Alps. Rofflaschlucht or Roffla Gorge is located on this route. Due to the opening of Gotthard, life in Andeer became harder. Because of this, Christian Pitschen-Melchior decided to leave. Together with his wife Maria, Christian emigrated to America in 1890.

In America, they visited Niagara Falls and saw its success. This knowledge together with homesickness changed their lives. They decided to come back to Switzerland a decade later in 1901. It was their vision for Rofflaschlucht that led them back.

In 1901, they began to forge their plans for Rofflaschlucht. This entailed taking over the guest house and planning the rock gallery. Even though the costs were too high, the Melchior family found ways to get through the massive rocks. In the summer of 1907, the first part of the rock gallery opened.

This area is part of the Rhine River. As it is such a long river, it has been divided into various parts called Hochrhein, Alpenrhein, Vorderrhein, and Hinterrhein.

Andeer and Rofflaschlucht are in the area called Hinterrhein. Hinterrhein, roughly translated to the posterior Rhine River, encompasses Rheichenau to San Bernardino.

Andeer is the main place to visit in Schams. It is a known climatic health resort and spa town. It is also a small winter sports place with good infrastructure. The small street from the Middle Ages offers interesting relics from the past. The surrounding mountains such as Piz Vizan and Piz la Tschera are also worth touring.

How do I get to Rofflaschlucht?

With public transport, you can reach it via Chur. From Chur, take the bus to Andeer, Tgavugl, and then change to the next bus going to Andeer, Rofflaschlucht. Total time from Zurich takes 2 hours and 25 minutes.

You can also take the train from Chur to Thusis before changing to the bus to Andeer, Rofflaschlucht. This connection is a bit longer (2 hours 50 minutes).

With the car, you can reach them through A13/E43. Then take the exit Rofla/Avers. There is a parking lot right beside the Guest House.

Can I hike to Rofflaschlucht?

There are some hiking paths that lead to Rofflaschlucht. One very well-known trail is called viaSpluga.

The viaSpluga hiking route is an age-old route used even by the Romans. It is the direct route from the South to the North. This is a two-thousand-year-old transit route known in history. The route traverses 65 kilometers through culture, gorges, bridges, and churches from Thusis to Chiavenna.

The viaSpluga route can be completed in 4 days with the following stages:

Rofflaschlucht can be found in the second-day stage, Andeer to Splügen. It is a 14-kilometer trail that starts in Andeer, before passing by Rofflaschlucht and Sufers. The trail ends in Splügen. The hiking trail can be completed in roughly 4 hours and 50 minutes.

How much does it cost to go inside the Rofflaschlucht?

Hotel guests do not need to pay for entrance.

What are the Opening Hours of Rofflaschlucht?

Rofflaschlucht is open from May until mid-October, daily from 9:00 AM to 7:00 PM. Please check the website for more information.

The Roffla Restaurant is open from 11:00 AM to 9:00 PM. They serve fresh trout, Rösti, and Röstipizza. In summer, they also serve various grilled food.

This was a really nice place to visit. It reminded me of our trip to Valle Verzasca. The water’s color was really similar – a nice turquoise or emerald green color, depending on the light.

It was really easy to find Rofflaschlucht after exiting Rofla/Avers. There was also ample parking. I believe that Rofflaschlucht is not well-known compared to Viamala Gorge (Viamala Schlucht). There were only 2 other groups who came at the same time we did. When we left, there was another group that came. It wasn’t as full as Valle Verzasca in Locarno, for example.

We entered the inn. Before going to the gorge, we passed by a small museum that contains information about the history of Roffla Gorge. It was tiny but contained all the relevant information regarding the Melchior family. There is also a restaurant which serves trout, rösti, and röstipizza.

Although it is an easy walk, I wouldn’t recommend coming in with children’s strollers. The path is not paved. And do wear sturdy shoes, as they could get wet in some parts. The path is secured by handrails.

After visiting Rofflaschlucht, we headed to Andeer to walk around the village. It is only 3 kilometers (or 5 minutes) away from the car. I would also definitely recommend visiting it as it is a charming village with cobbled-stone streets and houses with sgraffiti.