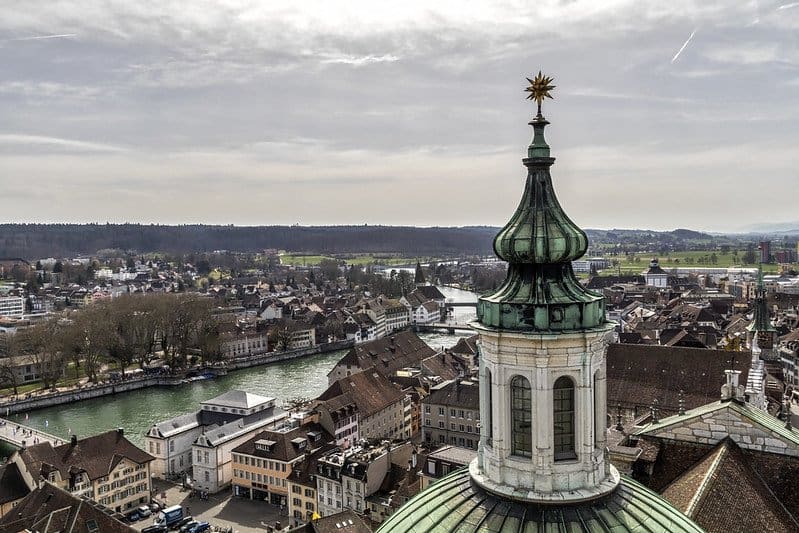 Solothurn is generally regarded as Switzerland’s most beautiful Baroque city. Solothurn is a city, municipality, and the capital of Solothurn, a canton in Switzerland. The city is situated along the Aare River and at the southern end of the Jura mountain range. It lies between Biel/Bienne and Olten, while Bern is just 43 kilometers away.

Combining French charm with German practicality, Solothurn is a fascinating small city. Aside from its impressive past, Solothurn offers a wide range of contemporary art and entertainment.

Solothurn is often called Switzerland’s most beautiful Baroque city and is the 11th most relevant city in Switzerland.

The old town is a pleasant place to walk among historical monuments, patrician houses, and strong fortifications. It is closed to cars and has many small shops and hotels. The city is home to several cultural events that transcend regional significance, including the Solothurn Film and Literature Days.

If you want to discover some of Solothurn’s best attractions, then be prepared for an adventure. We’ve compiled a guide below to help you discover all of Solothurn’s top attractions. This blog post will talk about the 9 best things to do and see in and around Solothurn.

Those looking for a place with a stunning view should visit this cathedral. With beautiful stained glass windows, St. Ursus Cathedral has an exterior that will catch your attention. Upon entering the building, you are awestruck by how large it is inside.

Solothurn’s Cathedral is one of the most important and recognized Swiss treasures of national significance. It was built between 1762 and 1773 by the architects Gaetano Matteo Pisoni and Paolo Antonio Pisoni. The Cathedral took eleven years to build and is principally the city’s main attraction.

St. Ursus Cathedral, constructed of lightweight Jura limestone, is among the most important buildings of early Swiss neoclassicism.

This 66-meter-high tower offers breathtaking views of the city, surrounding area, and mountains from its 249 steps. It used to be home to a lookout. If the weather is suitable, it can be climbed from Easter to All Saints Day. You can see the old town and Aare from here.

Furthermore, the cathedral has another smaller church with stained glass windows. The walls are covered in old paintings of saints, as well as medieval sculptures. Just for a little while, it’s like traveling back in time.

During the search for a crossing over the Aare on which to build the road connecting Aventicum (modern day Avenches) with Vindonissa (a Roman legion camp), the Romans chose Salodurum. Later, the Romans converted it into a fortress with temples and baths. Located in the lowlands of Switzerland, it is now the modern town of Solothurn.

Check out this article to learn more about other Roman settlements in Switzerland: Was Switzerland Part Of The Roman Empire?

Solothurn hosted the coronation of Henry III as king of Burgundy in 1038. During the 16th and 18th centuries, the Catholic city of Solothurn was the seat of the ambassador of the French king. Therefore, most of the buildings in the historic part of the city date from this era. The close relationship with France lasted until the French ambassador left Solothurn in 1792.

In Solothurn, you can see eleven public fountains that showcase the town’s wealth during the age of ambassadors. Solothurn has more fountains than any other place in Switzerland, and most of them are from the 16th century.

A 17th-century city wall, partially enclosing Solothurn’s historic center, surrounds the left bank of the river. There are many other historic buildings in Solothurn’s old town. You will feel like you are back in time when you walk around this city with beautiful baroque buildings and churches. The city’s compact size makes it easy to explore the city’s narrow streets on foot or by bicycle.

There are also a number of guided tours available and these are a great way to get to know Solothurn.

By following the path through the forest, you can get to Verena Gorge and Hermitage. Surrounded by forest and wildlife, St. Verena Hermitage is still inhabited today. It’s a perfect place to get away from stress and enjoy nature.

Solothurn’s old town is about 20 minutes away from the Hermitage.

They sing traditional carols and listen to readings from scripture before celebrating Mass with their priest every year on December 24th. Anyone looking for a spiritual experience during the holiday season will enjoy this event.

The Jesuit Church is a few steps away from St. Ursus Cathedral. In 2015, the last restoration of the church took place. It is open for visitors every day.

Solothurn is located in the lowlands of Switzerland, but the Jura Mountains are nearby. Therefore, if you miss the mountains while visiting Solothurn, they are right next door in Weissenstein.

Weissenstein is a mountain in the Jura, located north of Solothurn in the Swiss canton of Solothurn. On the eastern side of the Juras, it is located 1,300 meters above sea level.

Boat Ride on the Aare

From Solothurn, you can take a boat to Biel/Bienne. At Altreu, you might see storks. In fact, the center in Altreu was declared a European Stork Village by the EuroNatur Foundation.

While on the boat, you can also view Büren an der Aare, a historic town with a castle, town hall, town fountains, and arcades. You can also observe the locks in Port.

An enjoyable boat ride in scenic surroundings is well worth doing while you are there.

Known as the Clock Tower, the Zeitglockenturm is the center of the city. One of the most popular attractions in the city, it is an astronomical clock on the main gateway of the city.

It was added in 1545 to a building from the 13th century. Three hands make up the clock. The hour hand indicates the hour of the day and night. There are also two hands representing the sun and moon.

The Clock Tower is near the Jesuit Church on the street leading up to St. Ursus Cathedral.

The Solothurn Art Museum (or Kunstmuseum in German), is housed in a magnificent neoclassical building. This was built in the early 1900s outside the ancient city walls.

Many interesting paintings are displayed thanks to the generosity of local donors. Its collection includes works by Klimt, Hans Holbein the Younger, Vincent Van Gogh, Henri Matisse, and Ferdinand Hodler.

Museum of the Old Arsenal

It houses a large collection of weapons, rifles, cannons, and armor – the Museum of the Old Arsenal. If you’re an armor buff, you’ll definitely want to see the 400 pieces of armor displayed there.

The Museum is located at Zeughausplatz 1.