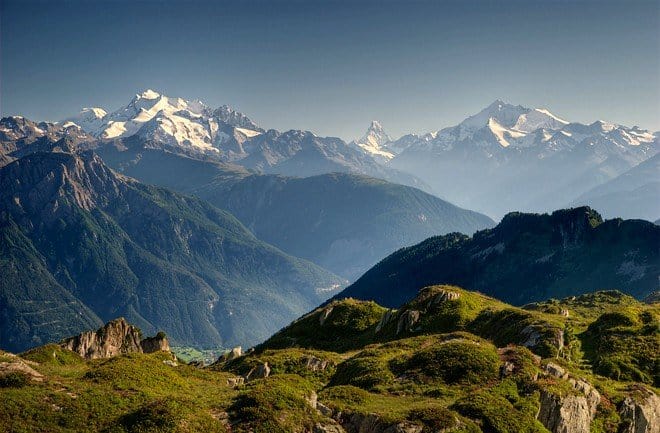 Snow-capped mountains, rolling hills, pristine lakes, picturesque villages, romantic castles, and majestic waterfalls make Switzerland a very attractive travel destination. Obviously, the best time to visit will depend on the season and the month, each with its own advantages and disadvantages. Whenever you want to visit, you’re sure to find something worthwhile to do. In case you are planning a visit to Switzerland during the shoulder season, this article might be useful to you.

Switzerland’s Shoulder Season: When is it?

The shoulder season in Switzerland is between the ski season and the hiking season.

Since each mountain resort has its own skiing and hiking season, the start and end dates will vary depending on the resort.

Especially early in April, the ski resorts on higher elevations will still be enjoying a winter season. During that period, as smaller and lower-rated ski resorts close, the majority of ski enthusiasts will flock to the remaining open resorts.

Let’s have a comparison table to illustrate my point.

I hope the comparison table above illustrates what I’m trying to say. Knowing when you plan to visit Switzerland will allow you to plan your itinerary accordingly. Some cable cars will take a break for scheduled maintenance, prepare the slopes, or to clear the ski slopes, etc.

Regardless, expect that most cable cars will not operate between early May and the third week of May. Some mountain resorts will still be in the midst of their ski season if you arrive earlier, whereas some are slowly winding down their operations.

If you wish to visit during late summer or early autumn, September is probably the best time. As schools start back in the middle of or during late August, most families do not go on vacation in September. During this time, you can get great deals on hotels and self-catering accommodations. In addition, most cable cars are still in operation until the middle or until the end of October.

Switzerland’s Shoulder Season: What happens during this time?

If you come during shoulder season, you should be aware of the following:

You can also arrange your itinerary to arrive just before cable car operations end. Alternatively, you can come just after they start running.

Research does pay off when you want to visit Switzerland during shoulder season. We hope you found this article helpful.