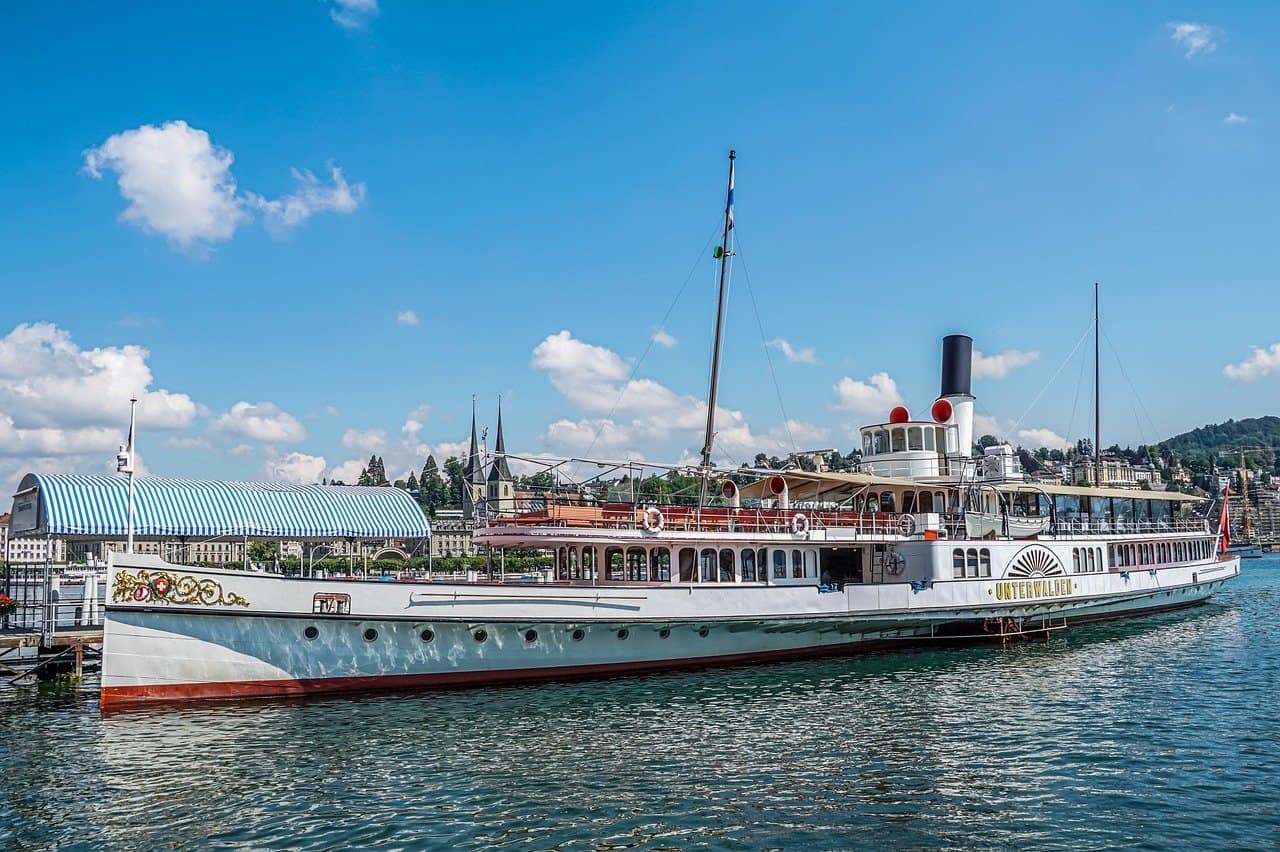 While Switzerland is a landlocked country with no open seas, it does have around 1,500 lakes. Riding boats, in particular also steamboats, is one of the many ways to enjoy the country. It is also another means of transport to go from one village to another.

In this article, we present the ultimate list of steamboats in Switzerland in seven of Switzerland’s more popular lakes. We discuss below paddle steamers, except for one screw steamer called Greif.

Quick Overview of Lakes in Switzerland

Switzerland is the source of approximately 6% of Europe’s freshwater reserves. The largest lakes are at the northern foot of Jura. Lakes Geneva, Neuchâtel, and Biel are among the lakes at the foot of Jura. There are also more in the Lower Alps and Northern Alps (Lakes Thun, Brienz, and Lucerne). Near the borders to Germany and Italy, Switzerland also has large lakes. Switzerland has Lake Constance bordering Germany and Lake Maggiore bordering Italy. Most boat operations occur in the larger lakes.

Now let’s begin with the list of steamboats or paddle steamers cruising on the Swiss lakes.

The Greif is the oldest and only coal-fired steamboat used in public today. It is in excellent condition. This passenger ship still operates in Lake Greifen in Zurich Oberland, Switzerland. Lake Greifen is the second largest lake in Canton Zurich.

In 1428, the mayor and council of Zurich commissioned a 30-person ship built. This was for the bailiff of Lake Greifen to carry out various errands. The beginning of industrialization necessitated fast transport routes. Slow and small boats were no longer enough. The first steamboat produced for Lake Greifen, unfortunately, sank due to overload.

In 1895, Escher Wyss & Cie was commissioned in Zurich to build the Greif Steamboat. Until today, this ship travels regularly on Lake Greifen.

Imagine having a water volume of 89 billion cubic meters in a lake. That’s how large Lake Geneva is. It’s the largest inland lake in Europe. This huge lake extends over a total area of 582 square kilometers. That’s three-fifths in Switzerland and two-fifths in France.

The 167 kilometers long coastline presents itself to the ship’s passengers. You can see the lovely vineyards, the alpine panorama of the Savoie of France. In Switzerland, we see the Valais and Vaud Alps. It is beautiful and attracts many tourists from all over the world!

On May 28, 1823, The William Tell was the first steamboat in the Swiss lakes to enter the waters of Lake Geneva. The boat was on request of Edward Church, the then consul of the United States of America. It could take 200 passengers and reach a speed of 13 kilometers per hour. The steamer served the route between Ouchy and Geneva.

Today, CGN is proud of its fleet of eight paddle-wheel vessels. Five of these vessels are steam vessels. The other three have diesel engines. The fleet also includes eight diesel-powered screw ships. The shipping company owns the largest inland lake fleet of its kind in Europe.

Going around Lucerne with the boat is definitely a wonderful way to spend time in the city. The Lake Lucerne ship company provides several cruise experiences. You see fjord-like landscapes, mountains, and beautiful villages. There are many routes to choose from. Simple round-trip tours around the lake abound. There are culinary experiences on the boats. You can also combine different legs, ex. going with the boat in one direction and then the train coming back.

Apropos steamboats: The oldest one in Lake Lucerne, Steamboat Uri, had its maiden voyage in 1901.

The five historic paddle steamboats are:

Only one of the five paddle steamboats is capable of sailing under the low Acheregg bridge. Steamboat Unterwalden, as the steamboat is called, cruises until Alpnachstad. Alpnachstad is the valley station of Mount Pilatus. The steamboat has a funnel and wheelhouse which can be hydraulically lowered. It is fascinating to watch.

These steamboats from the olden days are so popular. They even have fan clubs! Special tours like villa-watching in Meggen or sunset boat rides are available. The location of the ships is near the train station entrance. There is also a modern parking area near here.

It is definitely a wonderful experience to ride the boats on Lake Thun. In the Bernese Oberland, Lake Thun is the largest one. Visitors can enjoy the panorama from all sides – castles, meadows, and the Bernese Alps.

TIP: Did you also know that children can ride for free on their birthdays and on Saturdays?

The nostalgic steamboat Blüemlisalp cruises once daily. We have Verein Vaporama to thank for this boat. In 1971, it could have been put out of service. Yet, Verein Vaporama renovated the steamboat.

Nowadays, this proud steamboat is one of the most popular tourist attractions in Lake Thun. It is nostalgic and relaxing. It cruises from Thun to Interlaken West and back. This tour takes roughly 2 hours. During the trip, you can enjoy the amazing views of Hünegg Castle and Park, Oberhofen Castle, and Gunten. The steamboat cruises daily from July to October.

Available from Tuesdays until Saturdays (July to mid-September) is a late afternoon cruise. The path starts from Thun to Beatenbucht and then back, stopping at all stations as shown in the timetable. It departs Thun at 6:40 PM and comes back at 9:20 PM.

Escher Wyss AG built Neuchâtel Boat in 1912 to carry 550 people. The boat operated on the Jura lakes. It is the only half saloon steamer in service in Switzerland. It can pass under canal bridges and operate on all three lakes (Lake Biel, Lake Neuchatel, and Lake Murten).

The steamboat was not in service due to a boiler defect until 2013. Before this, it was a floating restaurant named Au vieux Vapeur in Neuchâtel. It was later renamed Au Beateau Restaurant. Denis Barrelet together with the locals and the federal government helped Mr. Barrelet to buy it back in 2017.

Although the boat still cruises on Lake Neuchâtel, it no longer goes with the original steam engine. The new steam engine was found in the paddle steamer Ludwig Fessler of the Chiemsee shipping company.

The Lötschberg is a paddle steamer built back in 1914. It is the most renovated steamer in Switzerland. You can find it cruising on the bottle-green Lake Brienz – 14 kilometers long and 3 kilometers wide.

It cruises twice a day during the summer months. The steamboat goes from Interlaken East up the Aare to where the lake begins. The ship then heads to Bönigen, Ringgenberg, Iseltwald, Giessbach, and to Brienz. There is also an evening tour in July and August.

Two large steamboats cruise on Lake Zurich. The older one, Stadt Zürich, was built in 1909. This beautiful Belle Epoque boat features a well-preserved saloon and a glazed upper deck. The second one, Stadt Rapperswil, was built in 1914. Both ships were built by Escher Wyss & Cie.