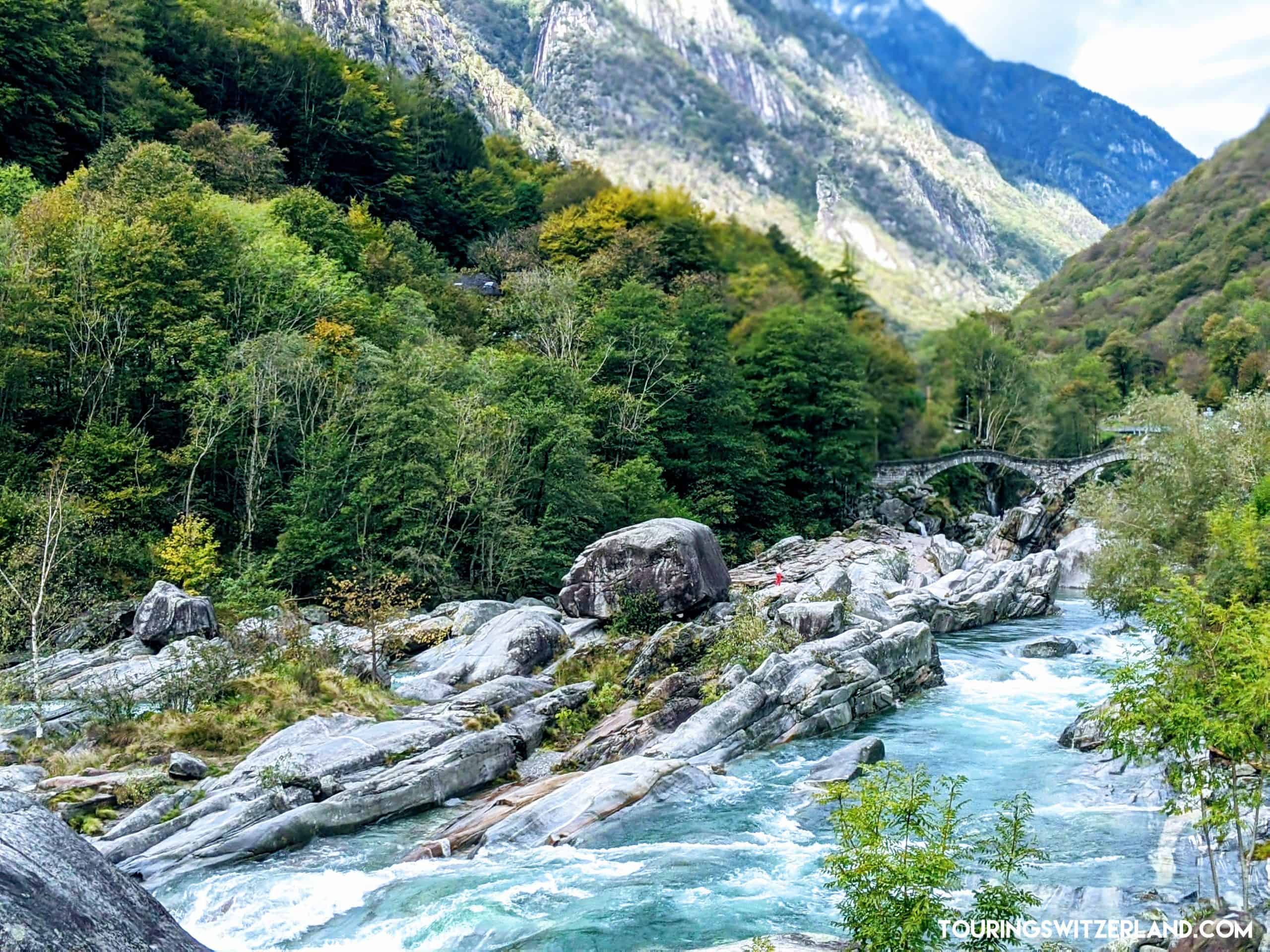 Verzasca Valley is one of Ticino’s most well-known valleys. It is located north of Lake Maggiore.

The Verzasca River flows through the valley between Leventina and Maggia. The river is very popular, especially during the summer when people bathe in them. The water is an amazing turquoise or emerald green color that looks so fresh and beautiful. It is likely the color of the water that draws tourists here. Unlike other rivers, it’s greener, and it’s extremely beautiful.

I guess it isn’t surprising that there are so many pictures of this place. The scenery is absolutely gorgeous.  The water could, however, be dangerous, so those who bathe in it need to be aware of the dangers this could present.

Due to its secluded location, the Verzasca Valley managed to retain its original character. Prior to the Middle Ages, its inhabitants were free farmers. Until 1870, the valley was completely undeveloped. In the past, this 30-kilometer valley was accessible only by foot.

As with other valleys in Ticino, Verzasca has also seen a gradual decline in population. The men left to find work elsewhere, but the women stayed to tend to the fields and animals. Men were also recruited as mercenaries for foreign armies.

With the construction of the first roads and the ease of access to the valley made possible by public transportation, tourism in the valley flourished. Despite some locals moving elsewhere to earn a living, most who remained found work in the tourism industry.

Verzasca Valley is very similar to other valleys in Ticino. The houses here (known as Rustici) are made of grey stone and rugged stone roofs. Rustici houses have been converted into holiday homes that can be rented easily. By doing so, it ensures the valley retains its unique appearance and that the local houses contribute to the prosperity of the region.

Even though there are many beautiful natural landscapes in the valley, in addition to its clear green waters, there are some highlights that you may want to consider.

There is nothing more beautiful than the emerald waters flowing under the Ponte dei Salti, a Roman bridge.  It crosses the Verzasca River and is one of the most popular spots in Verzasca Valley. It also has a baroque church from the 18th century

Lavertazzo and its famous Roman Bridge Ponte dei Salti are hard to miss. First and foremost, there are probably tons of cars parked nearby. There may also be a lot of people walking around near the bridge or jumping into the water. In recent years this spot has grown in popularity. A video uploaded by an Italian went viral, garnering over 3 million views (see here). It made Lavertezzo a popular destination for Italians.

Although it does not date back to the middle ages, the Roman bridge Ponte dei Salti is a beautiful photo subject. During the 19th century, it was actually destroyed at some point and rebuilt. This bridge crosses the beautiful green Verzasca River.

It is important to note that many people have drowned in the waters and you should exercise extreme caution while bathing.

Corippo is a small, picture-perfect village in the Verzasca Valley with Rustici-style houses. This village sits on a hilltop at a height of 563 meters above sea level. In actuality, it is Switzerland’s least populous municipality, with around 9 to 12 residents.

From October 2020, the village of Corippo has merged with four other villages to form the new municipality of Verzasca.

Corippo is currently protected by the Swiss Inventory of Heritage Sites.

If you would like to read more about Corippo, check out our article Corippo, Switzerland: Ticino’s Charming Hilltop Village.

Sonogno is a village at the very end of the Verzasca Valley.  It has well-kept houses and alleyways made of granite. In addition to the museum, Sonogno has a sheep’s wool workshop (Casa della Lana). Approximately 96 people live there. Additionally, many hikes start from here.

As of October 2020, Sonogno has merged with four other villages to form Verzasca.

There is a reservoir named Lago di Vogorno in Gordola within the Verzasca Valley. The reservoir is used to generate electricity.

The lake is held in place by the Verzasca Dam. Having a height of 220 meters, it is the fourth-highest dam in Switzerland after Lac des Dix, Lac de Mauvoisin, and Lago di Luzzone.

Bungee jumping can be done at Verzasca Dam‘s Lago di Vogorno. The dam is famous for its bungee jump at the beginning of GoldenEye, a James Bond film starring Pierce Brosnan. A plane flies over the dam, showing the high dam before Bond jumps from it. Since the film, the dam has become a popular Bungee Jumping location.

In the Verzasca Valley, you can hike the 25 to 27-kilometer Sentierone Valle Verzasca Trail that runs from Tenero to Corippo and ends in Sonogno. It is also possible to travel from Gordola to Vogorno before finishing in Sonogno. Both routes will take more than nine hours.

During the hike, you will pass through emerald-green water, cliffs, and alps, as well as old buildings and chapels.

Spring through autumn are the best seasons to access the path. During winter, snow may present some challenges.

If necessary, the trail can be started and stopped at various points. It is easy to move between different locations in the valley using buses. There are also multiple places to park your car in the valley.

In the Verzasca Valley, the BoBosco trail runs alongside the Verzasca River. While walking, climbing, and having fun in the forest, you can enjoy the scenery of the valley with a Boccia ball. Ball tracks are made of natural materials such as wood and strings.

The Associazione BoBosco has a wonderful 3-minute video on YouTube showing the BoBosco trail that you can watch below.

Almost all of the stations are near rivers or waterfalls. For children as well as adults, the whole trail is a great adventure.

Verzasca Valley is popular for a good reason. The valley is breathtaking thanks to the emerald green colors of the Verzasca River, the old stone houses, the stunning mountains, waterfalls, and the idyllic villages.

In addition to Lavertezzo, which is the social media star among the villages, there are several other villages (or hamlets) that you should also explore. Have a look at Corippo, a quaint village on top of a hill hardly inhabited by anyone. Or you can walk around Sonogno at the end of the valley. It is truly interesting and will feel like going back in time. Here, there are no modern houses. You only see traditional stone houses.

If you are in Tenero, Locarno, or Ascona, Verzasca Valley is a must-see. Make sure you have your camera with you. There is no way to avoid taking lots of pictures. That’s how beautiful it is.