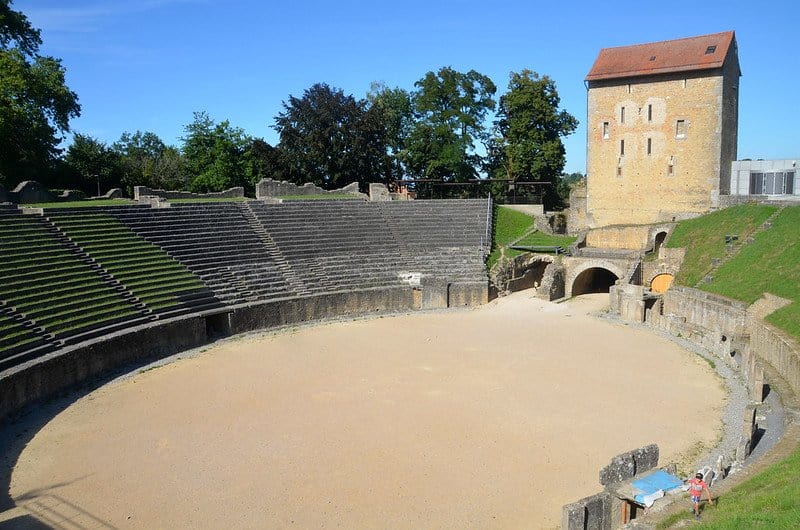 The power, influence, and contribution of Ancient Rome to modern history are legendary. Due to the proximity of Switzerland to Rome, it comes as no surprise that the Ancient Romans looked to expand to present-day Switzerland.

In 58 BC, Julius Caesar won against the Helvetii tribe during the Gallic Wars. The Romans started settling in Switzerland one battle after another. This win paved the way for the Romans to rule parts of Switzerland.

During the next two centuries of peace after the Gallic Wars, lots of cities developed. These cities prospered under Pax Romana. These Roman cities were:

All these Ancient Roman settlements are still wonderful to visit these days. The Romans helped build castles, streets, waterworks, thermal baths, and forums.

Historical Monuments from the Roman Empire in Switzerland

Thanks to the Roman Empire, Switzerland has these wonderful historical monuments and infrastructure. There are three Roman settlements in Switzerland that have excavated and preserved structures and remains from the Roman period. These are present-day Avenches (Aventicum), Kaiseraugst (Augusta Raurica), and Windisch (Vindonissa).

Some other cities, like Nyon and Chur, also have vestiges of the Roman Empire that you could visit.

In this article, we list the tourist destinations brought about by the Roman Empire.

Avenches, in Canton Vaud, is a municipality that used to be a Roman Colony called Aventicum. It was, in fact, the capital of the province. Both the Romans and their predecessors, the Helvetians, made Avenches their capital.

The Romans established Aventicum as their capital from 15 to 13 BC. At its peak, it had 20,000 inhabitants. This number has dwindled to less than 500 today.

Nowadays, this charming medieval village is an interesting and attractive town to visit. Many structures in Avenches are listed as Swiss Heritage Sites of National Significance. These include the following:

The entire town of Avenches is also included in the Inventory of Swiss Heritage Sites.

The municipality Kaiseraugst is located in the Rheinfelden region of Aargau. It used to be a Roman colony – Augusta Raurica. It was established in 44 BC by Munatius Plancus. This place was, until 3 AD, a city with approximately 30,000 inhabitants

Kaiseraugst is just a stone’s throw from Basel in Switzerland. It is an outing for the entire household that provides much and costs little. Since 1582, excavations have brought about the following structures:

Windisch is a municipality in the Canton of Aargau. There used to be a Roman Legion camp here called Vindonissa. It is the only known Roman Legionary Camp in Switzerland.

You will find here historical places such as:

Roman Museums and Structures in Switzerland