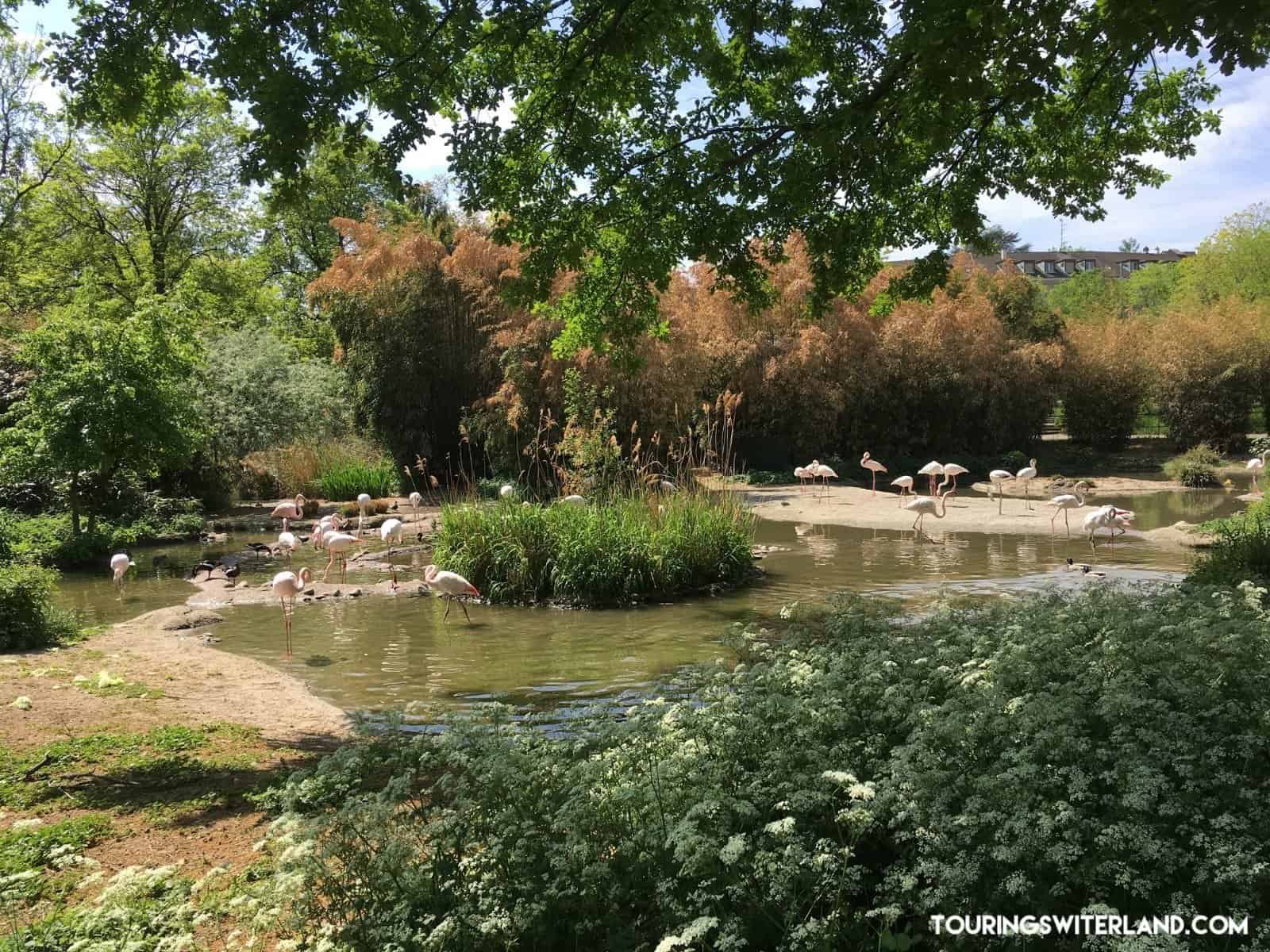 The Zoo Basel (also known as “Zolli”) is an enjoyable, albeit somewhat compact zoo in Basel, Switzerland. Although its space isn’t as large as Zurich’s Zoo, the Basel Zoo contains 7,554 different animals from 543 different species. And despite its relatively small size, over a million people visit this Zoo annually.

The following is an overview and my honest review of the zoo, trying to be as objective as possible.

Switzerland’s oldest zoo, Zoo Basel, was established in 1874, more than 50 years before Zurich opened its own zoo. Forbes Traveler also ranked it among the top fifteen zoos in the world.

As a project to showcase wildlife in Switzerland and Europe, it evolved into much more. Even back then, maintaining a zoo was a struggle, but they kept receiving and breeding new animals. Eventually, the zoo grew in size and popularity.

Today, progress is still present as the current zookeepers work to improve the facilities yearly and to ensure that the breeding programs are successful. Over time, they have progressed from enclosing the animals to creating an “animal park” for them. We see something similar in most of the zoos in Switzerland that houses animals.

“Findings from modern zoo biology and pressure from animal welfare and critical zoo visitors have contributed to the fact that the quality of animal husbandry today is clearly at a higher level than it was 20 years ago. The days when wild animals were presented to an amazed public like goods on display should definitely be over.”

Sadly, the Corona Pandemic has wiped out the Zoo’s budget. It lost millions of dollars during its 75-day closure. Currently, it is highly dependent on donations. As the country recovers from the pandemic that ravaged most of 2020 and the first half of 2021, this may soon change.

Right behind the zoo’s entrance is the Vivarium. Diverse species of colorful fish, squids, and anemones can be seen in its aquariums. Around midway through the exhibit, you will see amphibians and reptiles. Additionally, you will see two kinds of penguins – gentoo penguins and king penguins. Watching the penguins is a lot of fun. The public can observe where the penguins swim and where they stand and wobble from above the water. On your way out, you can also see the crocodile.

The aviary contains a variety of birds that are free to fly. Many species can be found there: Blue-topped hanging parrots, Glossy starlings, Gouldian finches, Little egrets, Crested partridges, and many others.

Renovations are underway at the aviary, which will reopen in 2023.

My children absolutely love going to the children’s zoo. A variety of animals from around the world are on exhibit here, including lamas, minipigs, donkeys, and shetland ponies. Generally, the animals are safe to pet. Most children only pet animals that come close to them.

In 2012, the Geigy enclosure for apes opened. You can watch these intelligent creatures playing and climbing here. There are five outdoor areas with netting for gorillas, chimpanzees, and orangutans. Visitors can observe the animals closely.

In March 2017, the Tembea Elephant Enclosure was opened to house the elephants. The elephants enjoy this indoor and outdoor area right next to the restaurant. There are approximately 100 feed stations and pools for bathing. There are also harvester ants, brown rats, and fish in this enclosure.

The Sauter Garden is located at the south end of the Zoo. To get to this area, you will have to walk across the park from the main entrance. Rhinos, hippopotamuses, snow leopards, and macaques live here. Animals are usually out and about and easy to see. Snow leopards, however, are difficult to view because they usually hide in their house.

How to get to Zoo Basel

There are parking lots directly in front of the zoo, but they fill up fast. As soon as the parking lot is full, people often look for an empty spot on the streets near the zoo.

Traveling by Tram or Bus to the zoo is easy. You will have several options:

Our Experience – An Honest Review

Our only opportunity to visit Zoo Basel is on weekends, and it is almost always crowded. Even if we arrive early, parking can already be challenging. The popularity of Zoo Basel extends beyond those residing in the city. Even people from across the border in France or Germany will be there.

We tend to eat in the restaurant near the elephants and the line at the self-service canteen can be quite long, especially around 12 o’clock.

Nevertheless, all of our trips to the zoo have been really enjoyable.

There is always something interesting to see in the zoo, regardless of its size. Fish, amphibians, and reptiles live in the aquarium and vivarium. Depending on how detailed the children wish to see the animals, we easily spend 30 minutes to an hour there.

It is also fun to watch the gorillas, chimpanzees, and orangutans play, eat, and climb in the monkey enclosure. Especially the baby monkeys enjoy being with their mothers. The apes seem to have an adequate amount of play space in their enclosure.

With or without Zoo maps, getting around is simple. It is not an extremely large zoo, unlike, for example, the Zurich Zoo, so even young children won’t feel overwhelmed. There is a good playground in the middle of the zoo near the Monkey House, with climbing structures for children. Our family also enjoys the children’s zoo with the domestic animals.

In summary, I find the zoo to be a great outing, especially for families with young children. It is compact, but also rather crowded since there isn’t much space. Nevertheless, you will find thousands of animals in this zoo. Furthermore, the zoo constantly strives to improve enclosures by renovating them one by one.

To make your visit as enjoyable as possible, I suggest arriving early rather than late or arriving very late in the afternoon and having snacks handy in case the restaurant lines are long.

Enjoy your time at the Zoo!